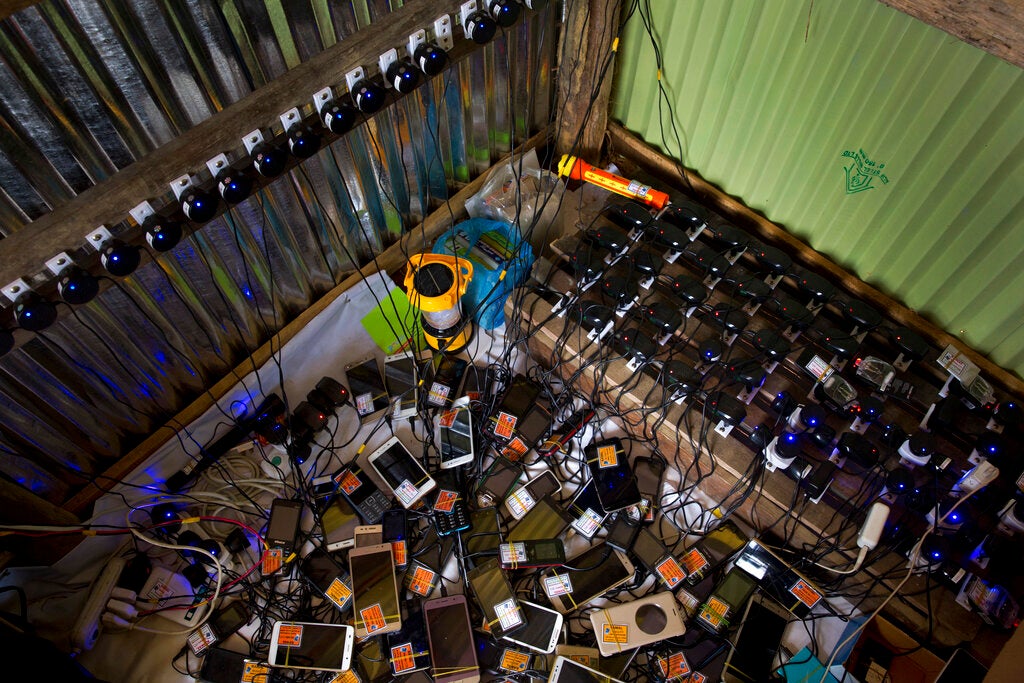 Dozens of mobile phones charge in a makeshift shop for a price of five taka (US$ 0.06), at a Rohingya refugee camp in Lambashia, near Kutupalong. (AP File Photo)

DHAKA, Bangladesh — Bangladesh’s telecommunications regulatory body has asked operators to shut down cellphone services in sprawling camps in the southeast where hundreds of thousands of Rohingya refugees from Myanmar live, citing a security threat and illegal phone use, an official said Tuesday.

Zakir Hossain Khan, a spokesman for the Bangladesh Telecommunication Regulatory Commission, said they asked the operators to respond to the order within seven days.

“The decision has been taken for national security reasons,” he said by phone.

“We have been stunned to see that Rohingya refugees are using mobile phones illegally and we don’t have a clear understanding of the situation,” he said.

Asked what sort of security threat the country is facing, Khan said a recent survey in the camps revealed that cellphones are being used there illegally. He said they have reports that people are present there who pose a threat to national security, but would not elaborate.

In recent months, more than 40 Rohingya have been killed amid concerns that some refugees are involved in smuggling illegal drugs from Myanmar. Last month, a ruling party member was killed in the area and police blamed Rohingya for the murder. At least four Rohingya have been killed in recent weeks in what police described as shootouts between suspected Rohingya criminals and law enforcers.

Until cellphone services are halted, operators have been asked to suspend data and internet service between 5 p.m. and 5 a.m. every day in the camps in Cox’s Bazar district, meaning that only basic phone calls can be made, Kahn said. In addition, they have been asked to ensure that signals from Bangladesh mobile operators cannot be received in Myanmar.

Khan said it was clear that the law is being broken because no one is allowed to obtain a cellphone SIM card without a national identity card or passport, which most refugees don’t have. A Bangladeshi can register a maximum of 15 mobile connections.

“We have asked the operators to inform us how the Rohingya got the SIM cards,” he said.

The decision sparked concern among the refugees.

“I have my family there. If I do not have a mobile phone, how can I stay connected?” said Mohammed Rashid, a refugee who fled to Bangladesh two years ago. “This is not a good decision for us. I hope the government will reconsider.”

Other refugees said they obtained SIM cards from Bangladeshi citizens who registered phones in their own names and then sold them to the refugees.

More than 700,000 Rohingya fled a harsh security crackdown in Myanmar two years ago and are staying in the refugee camps in Bangladesh.

Last year, the U.N.-established Independent International Fact-Finding Mission on Myanmar recommended the prosecution of Myanmar’s top military commanders on charges of genocide, war crimes and crimes against humanity. Myanmar has rejected the report and any suggestion its forces did anything wrong.

A second attempt to begin repatriating the refugees to Myanmar failed last month after no refugees agreed to return voluntarily.