A man in the United Kingdom could have lost his hand in a sawing accident, but skilled surgeons found a way to save it with a 17-hour surgery. One of the procedures involved attaching the amputated hand to his groin for two weeks.

A patient, identified as 46-year-old carpenter Anthony Lelliott, was rushed to St. George’s Hospital in Tooting, London, on May 30 after a chop saw accident. His hand was severed in two places, namely at the base of his palm and just below the fingers, the hospital said in a statement on Aug. 27.

Lelliott’s memory of the accident was hazy as he lost blood. “I threw myself off the saw… There was blood spurting out everywhere,” he recalled. His thumb and two other fingers were cut off in the accident. 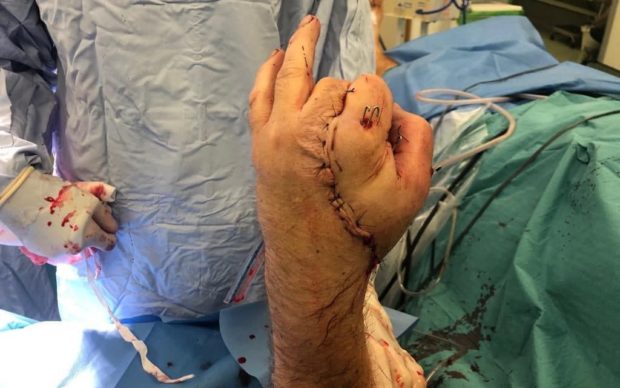 When he arrived at the hospital’s major trauma center, consultant plastic surgeon Roger Adlard attended to him and, based on his assessment, he could not work on the surgery alone. He called on microsurgery plastic surgeon Farida Ali to work with him, who responded even if she was not on duty and not on call.

“I’d say it’s probably the most complex amputation I’ve had to deal with. There are many surgeons who, once they’d seen that level of injury, would think it was unsalvageable,” said Adlard.

The initial surgery took 13 hours to get blood supply to as many fingers as possible. “After fixing the broken bones we harvested nerve and vein grafts. This involved taking veins from his foot and nerves from his forearm and using them to bridge the gaps between the structures in his hand,” he explained.

After the first operation, the doctors decided to remove his middle finger because it had “insufficient bone stability.” The finger was used to reconstruct skin and bone on his palm, which had some skin that was not surviving. This surgery was done by Sonja Cerovac.

Even with the second surgery, the patient’s palm still lacked skin, so it was decided that his hand would be attached to his groin to “borrow skin” in a procedure called pedicled groin flap. The procedure was performed by hand surgeon Jamil Moledina.

“Mr. Moledina cut a section of skin in Anthony’s groin and lifted it like a flap to cover the missing skin from his hand. It was sewn in place and left there for two weeks,” explained Adlard. “Eventually the skin from his groin grew new roots to where it had been transferred to his hand and we were able to cut his hand free.” The multiple surgeries have paid off, with Lelliott’s hand recovering with the help of specialist physiotherapists. Hand therapist Millie Chu said initially, light touches to the hand caused severe pain to Lelliott. “After just one month he is now able to tolerate his scar massage and exercises much more,” said Chu.

The next goal after hand movement is doing exercises and splinting to achieve pinch grip. Chu is hopeful of Lelliott’s progress: “Rehabilitation can be challenging but Anthony has shown great courage and motivation by already demonstrating great improvements.”  /ra