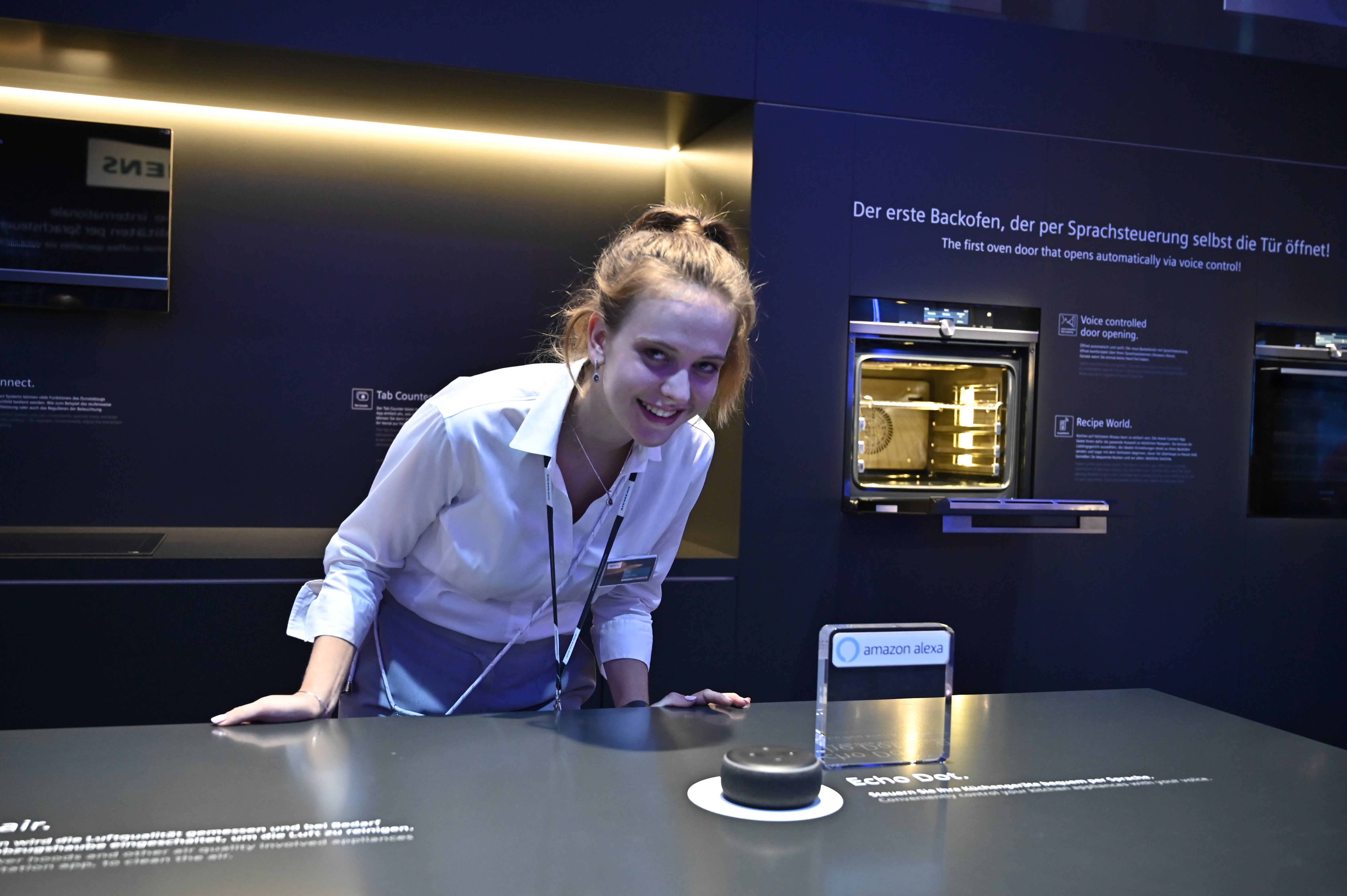 A volunteer smiles during a demonstration of a voice controlled oven during the international electronics and innovation fair IFA in Berlin on September 6, 2019. – Exhibitors from more than 100 countries will be presenting their latest products during the fair running from September 6 to 11, 2019. (Photo by Tobias SCHWARZ / AFP)

No time to walk or play with your pet puppy or kitten?

California start-up Varram showcased a Pet Fitness robot, which plays with cats and dogs at home via smartphone instructions, even dropping treats as a reward, while the owner is at work.

Sensors in the robot help it detect and stay away from furniture to not get stuck, avoiding bored pets.

The robot can be timed to play with the family pet at different times and keep track of how much activity the animal has had.

As executive director Jens Heithecker told AFP, “three main trends at IFA this year are 5G, voice control and AI (artificial intelligence)” with the latter two combined in innovations for the home.

Siemens claimed two world firsts with an oven that opens on voice command and separate washing machine and clothes drier that communicate via wifi to predict how long garments will need to dry.

The Home Connect system links household appliances, suggests recipes and even knows which ingredients are already at home, via cameras in the fridge.

Once the meal has been prepared, the oven door opens on voice command, leaving the cook with both hands to slide in the dish.

Meanwhile, the system’s washing machine has built-in sensors to measure the moisture in washed clothes, sending the information to the drier.

However, the sensor cannot detect whether a stray black sock is about to ruin a load of white laundry. “That would be useful to know,” admitted a Siemens spokeswoman with a smile.

Heithecker tips that of the thousands of items showcased at IFA, headsets and wireless stereos will make popular Christmas gifts, as they are “affordable, moveable, high quality and part of the digitally connected world.”

“Headsets with noise cancelling are mostly used in homes now, to squeeze out the surrounding noise – you go into your own world and won’t be disturbed if you want to hear music,” he added.

However, some of these items do not come cheap. Panasonic’s high-tech earphones are retailing for 1,200 euros ($1,326) while Samsung’s massive 219-inch television, aptly called ‘The Wall’, is retailing to business customers for around 500,000 euros.

Huawei created a buzz Friday by launching a new super-fast Kirin 990 processor, which has a version specially designed for the 5G era – the fifth generation of cellular network technology.

According to Huawei’s claim, the “industry’s first and only all-in-one” 5G chipset includes a modem with fast download speeds. The company also said that by using a single chip, the Kirin will make phones more efficient compared to their rivals, who use a separate processor and modem.

The new Kirin chip, no bigger than a fingernail, “can make phones much smaller,” boasted Richard Yu, who is in charge of Huawei’s consumer business group.

The Chinese firm is embroiled in US-China tensions with Washington advising its allies against using Huawei’s technology to build 5G networks, due to fears it could be used for spying by Beijing, an accusation the company denies.

Yu took no questions in Berlin, as Huawei also showcased their sleek Mate 30 Series, due to be launched on September 19 in Munich.

Not to be outdone, Korean rivals Samsung also showed off their 5G Fold, a phone which folds out into a single screen.

High-tech relief for the incontinent is offered by D-Free, a sensor which fits on the abdomen and detects changes in bladder size, calculating how full it is and giving a prediction via a smartphone about when the user will need to urinate.

The system is aimed at young children being toilet trained and the elderly worried about being caught short.

It keeps track of the average time between bathroom visits and a version for senior care homes tells staff which patients will soon need to visit the toilet.  /muf