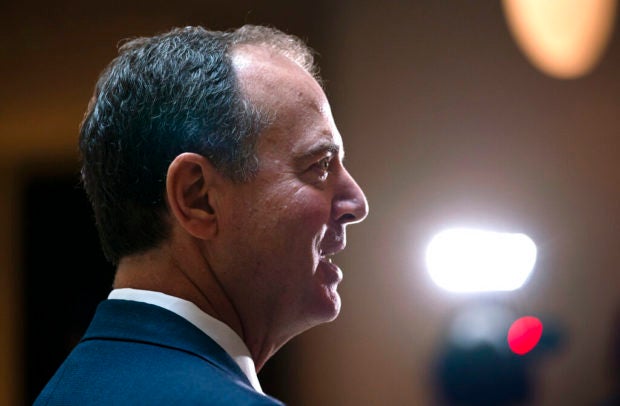 WASHINGTON — The head of the House Intelligence Committee said Friday he has been assured by the CEO of Facebook that the company is working on ways to prevent foreign actors from disrupting next year’s elections.

Rep. Adam Schiff of California met with Mark Zuckerberg and said the Facebook CEO showed a deep awareness of the threat to the elections from so-called “deep fake” videos and other technically advanced tools.

Schiff told reporters Facebook is “in the process of developing what I hope will be very strong policies on this. … I think he (Zuckerberg) fully appreciates the gravity of the situation.”

It was Zuckerberg’s third day of private meetings in Washington, following other sessions with top lawmakers and President Donald Trump. Zuckerberg also met Friday with the leader of a House antitrust investigation into the big tech companies and pledged to cooperate.

The House Judiciary antitrust subcommittee, led by Rep. David Cicilline, D-R.I., is investigating the market dominance of Facebook, Google, Amazon and Apple. The lawmakers recently asked the companies for a detailed and broad range of documents related to their sprawling operations, including top executives’ internal communications.

Cicilline and Rep. Jerrold Nadler, D-N.Y., chairman of the full Judiciary Committee, met in a separate session with Zuckerberg. Cicilline told reporters afterward that “Mr. Zuckerberg made a commitment to cooperate with the investigation, and we look forward to his cooperation.”

That cooperation would cover “a whole range of things,” Cicilline said, including providing the requested documents.

As he did when making the rounds on Capitol Hill Thursday, Zuckerberg left the meetings without answering reporters’ shouted questions.

The conciliatory tone from lawmakers on Friday stood in contrast to declarations the day before from Sen. Josh Hawley, R-Mo., a conservative who is the Senate’s most vocal critic of the tech industry. Hawley said he challenged Zuckerberg in their meeting to sell his company’s WhatsApp and Instagram properties to prove that Facebook is serious about protecting data privacy.

“The company talks a lot. I’d like to see some action,” Hawley told reporters.

Congress has been debating a privacy law that could sharply rein in the ability of companies like Facebook, Google, Amazon and Apple to collect and make money off users’ personal data. A national law, which would be the first of its kind in the U.S., could allow people to see or prohibit use of their data.

Rep. Doug Collins of Georgia, the senior Republican on the House Judiciary Committee, said Friday that Zuckerberg and lawmakers discussed data privacy in another meeting and that Facebook “is engaging to find solutions.” Collins also assured Zuckerberg that in their bipartisan antitrust investigation, the lawmakers were not taking “an adversarial role.”

Facebook, a social network behemoth with nearly 2.5 billion users around the globe, is under heavy scrutiny from lawmakers and regulators following a series of privacy scandals and amid accusations of abuse of its market power to squash competition.

In addition to the House probe, the Justice Department and the Federal Trade Commission are conducting antitrust investigations of the big tech companies, and a bipartisan group of state attorneys general has opened a competition probe specifically of Facebook.

Schiff said he also discussed with Zuckerberg cooperation between the tech industry and U.S. intelligence agencies to combat foreign interference in the 2020 elections. The government isn’t looking for companies’ confidential information other than that related to efforts by foreign powers to intervene in the elections, he said.

Cooperation between the industry and intelligence agencies has improved, “but there’s still more to be done,” Schiff said.

U.S. intelligence officials determined that Russia carried out a sweeping political disinformation campaign on U.S. social media to influence the 2016 election, with especially heavy use of Facebook.

Officials are especially concerned about so-called “deep fake” videos, which are altered using artificial intelligence and facial mapping to appear legitimate, and posing a threat to national security and the 2020 election. Some officials have called on companies such as Facebook and Twitter to take action against false videos.