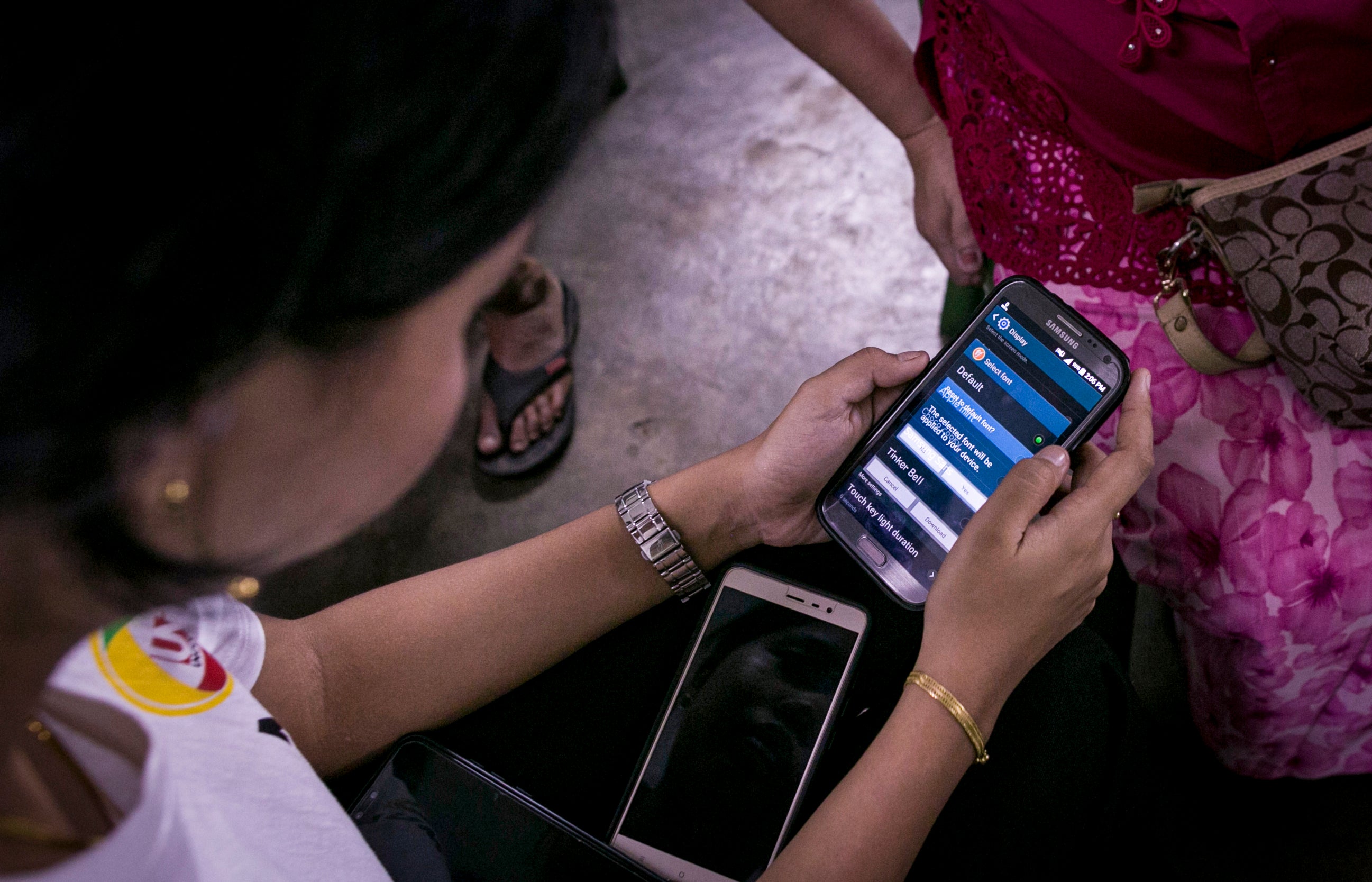 This photograph taken on September 22, 2019 shows Myanmar information technology volunteers assisting a mobile phone user switching from the old Zawgyi font to the unicode font in Yangon. – Accessing everything from Wikipedia to Google Maps in Myanmar is about to get a lot easier when it finally adopts the universal code underpinning phone and online communication next week. Tech experts say the move to bring the country more in step with the rest of the digital world is crucial, but will cause “chaos” in a rocky transition period. (Photo by SAI AUNG MAIN / AFP)

YANGON, Myanmar — Accessing everything from Wikipedia to Google Maps in Myanmar is about to get a lot easier when it finally adopts the universal code underpinning phone and online communication next week.

Tech experts say the move to bring the country more in step with the rest of the digital world is crucial, but will cause “chaos” in a rocky transition period.

Myanmar is the last nation to embrace unicode that has significant numbers of people online. Without it, most users see international content — and a lot from within the country — as lines of meaningless symbols.

Household name websites can be impossible to read while translation and voice recognition software do not work.

October 1 is “U-Day”, when Myanmar officially adopts the new system. From then on, all electronic communication from government offices, telecoms companies, banks and media must be in Unicode by law.

Myanmar became a global code anomaly due to isolation under its former military junta.

Microsoft and Apple helped other countries standardize years ago, but Western sanctions meant Myanmar lost out.

IT pioneer Zaw Htut, 47, describes this as the final battle won in a decades-long code “war.”

However, making the switch to Unicode will be a turbulent ride, and he warned that initially there will be “chaos.”

But many will suddenly be unable to read messages on other apps and from banks or phone operators, while those who switch will no longer be able to communicate with friends still using the old system.

‘A lot of confusion’

Its popularity exploded as the country opened up from 2011 and smartphone use soared.

Today around 90 percent of people use Zawgyi instead of Unicode.

Incompatible without fiddly plug-ins, it only allows people to communicate in Burmese with other Zawgyi users, excluding the nation’s minority languages.

According to tech experts it could take years to achieve full migration.

Zaw Htut compares the abrupt switch to Unicode with the former junta’s overnight decision for Myanmar to drive on the right instead of the left.

“But we’re digitally empowering the nation,” he said.

Joox, a regional version of Spotify, said it is impossible to convert the millions of Burmese language songs on its app.

With the deadline looming, celebrities and influencers are hammering home the need to convert while technicians prepare for a deluge of queries.

An army of volunteers are helping in online forums and offline at teashops.

Yangon street vendor Mi Mi, 35, says she has heard about the switch but does not want to change.

An estimated 10 to 15 percent of mainly older phones will not be advanced enough to convert.

Many cheaper, illegally imported devices even come pre-installed with the old system — putting those too poor to buy newer models at a clear disadvantage.

Still others are excited at the wealth of information now at their fingertips.

“I’ll be able to read Wikipedia in Burmese,” says a beaming Aung Kyaw Oo, 62, as he leaves a drop-in session.  /muf