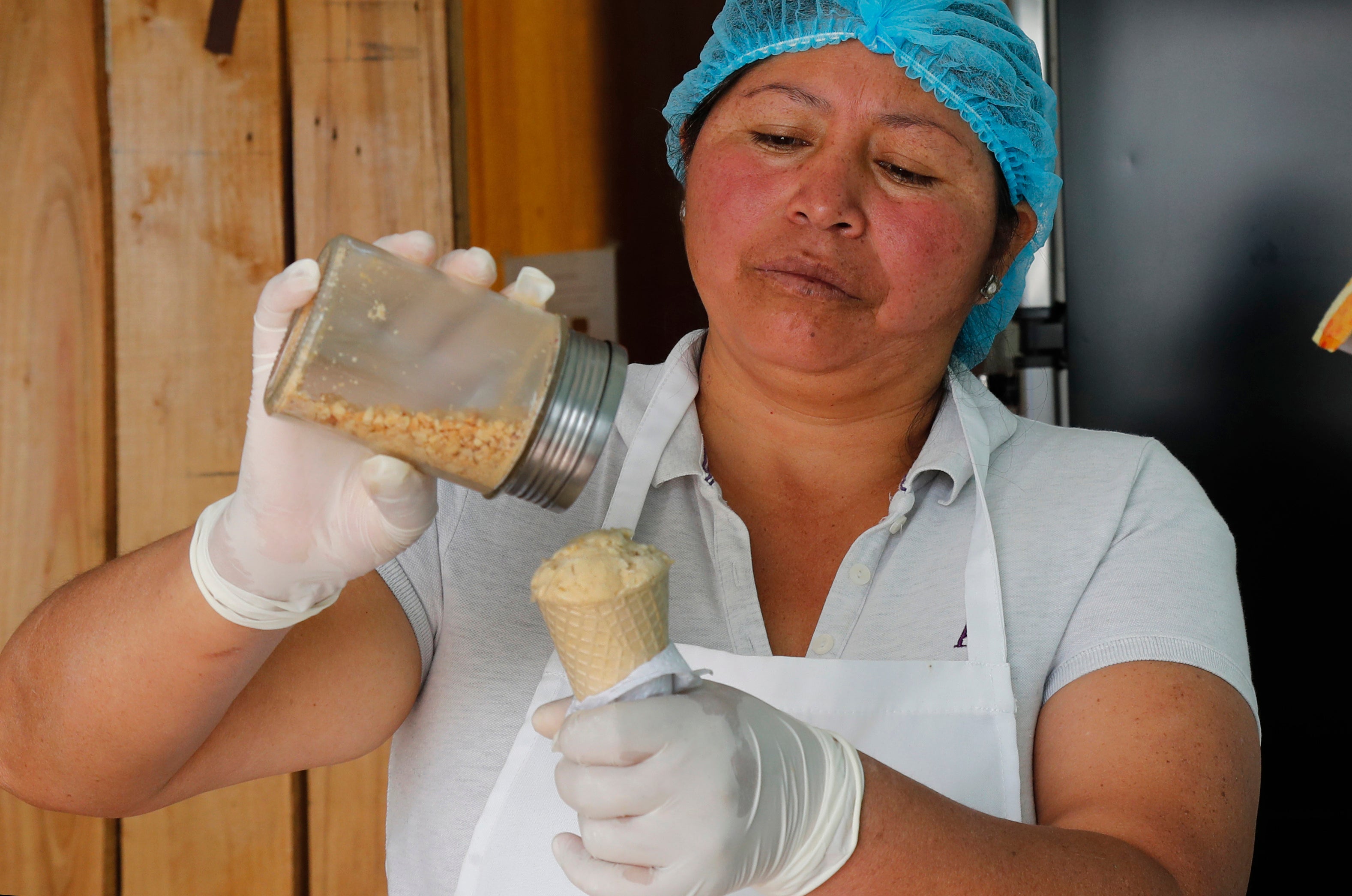 In this Sept. 28, 2019 photo, Maria del Carmen Pilapana tops a scoop of a guinea pig flavored ice cream with peanuts, at her stall on the outskirts of Quito, Ecuador. Out of work, with three children in tow, Pilapana began attending free training courses for entrepreneurs. She was challenged to do something innovative and, after six months of testing, she starting selling offbeat flavored ice creams. (AP Photo/Dolores Ochoa)

Anyone who thinks of guinea pigs as pets — cute, squishy, squeaking bundles of fur —  might find that idea hard to digest.

The rodents are a traditional hot dish in some Latin American countries, including Colombia, Peru and Bolivia. In Ecuador, people typically cook guinea pigs with salt and serve them with potatoes and peanut sauce. But one vendor is taking things to another gastronomic level, serving guinea pigs as a cold dessert.

Some people like ice cream made from “cuy,” as the animal is locally known.

“I was suspicious, but it was tasty,” said Marlene Franco, a 78-year-old retiree who tried a scoop at a stall next to a highway linking the Ecuadorian capital of Quito to the city of Sangolqui.

Pilapaña’s operation is small. It consists of two tables in an open area lined with dentists’ clinics and other businesses. Even so, demand is growing. Every week, the entrepreneur prepares 150 servings ($1 for a cone) of guinea pig ice cream.

She also makes 40 servings of ice cream flavored with beetles, also traditionally eaten as a salty snack, and a smaller amount of mushroom ice cream.

“My family and my husband thought I was crazy. They didn’t think anyone would like these ice creams, but now they’re our main product,” said Pilapaña, who acknowledges that she had her own doubts about whether her investment would pay off.

It was a close call. Out of work, with three children in tow, Pilapaña began attending free training courses for entrepreneurs. She was challenged to do something innovative and, after six months of testing, she starting selling her range of ice creams at the beginning of September.

Pilapaña manages to concentrate guinea pig flavor after cooking and preparing a pate from the animal’s flesh, adds milk or cream and refrigerates the concoction until it has the rough consistency of ice cream. The taste is similar to chicken.

The beetle and mushroom ice creams include fruits such as pineapple and passion fruit. Beetle ice cream has a slight aroma of wet earth.

Ants, cicadas and worms are used to make some desserts, often chocolate-infused ones, in parts of Latin America. But incorporating such ingredients  — guinea pigs included — into ice cream is unusual.

Carolina Páez, director of the anthropology school of the Catholic University in Quito, isn’t surprised.

“The guinea pig is a very important ancient food in Andean indigenous societies, especially for its high protein content,” she said. Other cultures eat various types of animals, Páez said, “so there is no reason to be amazed that Ecuadorians eat guinea pigs, even in ice cream.”

For Pilapaña, guinea pig ice cream is just the beginning. She has new flavors in mind: crab, chicken and pork.

“Seeing how my business is picking up, I’m sure I’ll do well,” she said.  /muf