How governments can manage the risks of digitalization without hindering innovation 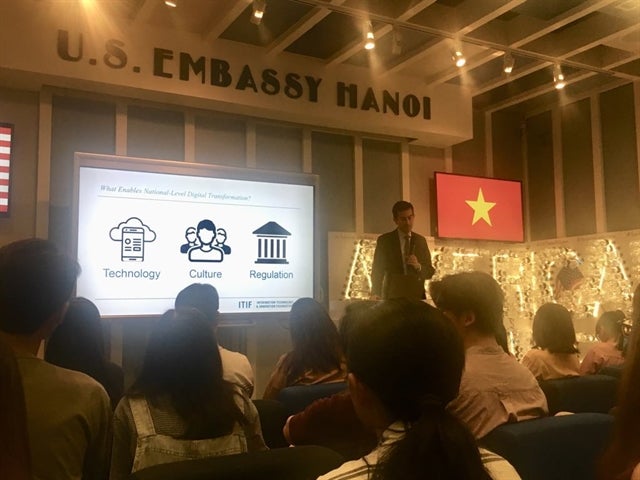 Daniel Castro talks about how governments can manage the risks of digitalisation without hindering innovation at the US Embassy in Hà Nội on October 8. — VNS Photo Thu Vân

HÀNOI — The United States Embassy in Hanoi on Thursday held a discussion on data mobilization and how authorities can manage the risks of digitalization without hindering innovation.

The speaker of the event, Daniel Castro, vice president at the Information Technology and Innovation Foundation (ITIF) and director of ITIF’s Center for Data Innovation, said in the past 10 years, the world had been shifting to a data-based economy.

In the latest trend, the world is now moving towards an algorithmic economy with new technologies such as AI, the Internet of Things, blockchain, etc. In this stage, the economy depends largely on data and data-driven innovation, which have brought momentous changes to the world.

For governments with the precautionary approach, they have adopted policies that block certain data flow.

“These policies have prevented the flow of data across the globe. This has increased costs for businesses. Especially for large businesses, when there is no free flow of data,” he said.

Castro, meanwhile, offered a few ways to help governments to manage the risks of digitalization without hindering innovation.

Firstly, he said it was necessary to stipulate that organizations must be responsible for managing the data they collect, wherever they store, process, or analyze data.

Secondly, although every country has different privacy laws, there is a need to have a mechanism to ensure the ability to access cross-border data in order to respond to security threats or hackers.

This would ensure that when a security incident occurred, law enforcement agencies could access each other’s data, and jointly investigate or respond to an incident properly.

Thirdly, countries needed to be responsible for blocking the flow of illegal information such as movies, music that infringes copyright, child pornography and hate speech.

Finally, governments must have a role in encrypting data and dealing with vulnerabilities in the system.

Castro writes and speaks on a variety of issues related to information technology and internet policy, including privacy, security, intellectual property, Internet governance, e-government, and accessibility for people with disabilities. In 2013, Castro was named on FedScoop’s list of the “top 25 most influential people under 40 in government and tech.” In 2015, U.S. Secretary of Commerce Penny Pritzker appointed Castro to the Commerce Data Advisory Council.