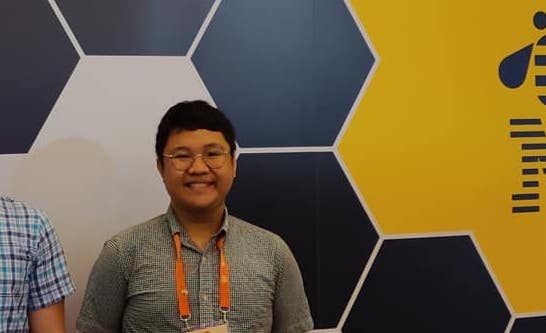 The problem of food waste spares no country — be it third-world countries or first-world powers, no one is exempted from the reality that while millions of families starve, tons of food are being thrown away instead of filling up the stomachs of the poor.

But the power of human ingenuity also spares no race. In the Philippines, a 19-year-old student has done – and is still is doing– his part in trying to help.

Justin Banusing, a Philippine Science High School–Western Visayas alumnus, was part of the team that won in a United States hackathon that called upon developers to solve the problem of food wastage.

The “Food Waste Developer Challenge” virtual hackathon was hosted by International Business Machine (IBM) in partnership with Angelhack and ran from July 25 to Aug. 23.

Banusing’s team formed FreShip, a software and hardware platform that minimizes food waste by creating containers that monitor the freshness of food. These containers are integrated with an e-commerce platform that allows otherwise wasted food to be resold somewhere else instead, IBM explained.

Banusing, currently a sophomore at the University of Washington (UW), is joined by schoolmates Tanner Koistra and Jonathan Cady, UW alumnus Nathanael Davidson, and Munaster Syed of FloridaTech, who headed the project.

“We’re a group of friends called Team Zero who met at a previous hackathon who like to enter hackathons together,” Banusing said in an interview with INQUIRER.net. “We’re particularly advocates of using tech to improve people’s lives.”

“Coming from agricultural countries, Muntaser and I kicked off the ideation session putting out flaws in the current importation system — one of which being thrown away food,” Banusing said.

Using IBM Watson machine learning, FreShip analyzes photos of food to determine their freshness and provide options for what to do with the food. For example, if bananas ordered by a supermarket become too ripe to sell, FreShip redirects them to a closer manufacturer that can use them instead, as per IBM’s explanation.

With FreShip, the team estimates that food waste can be reduced by 70% by 2022.

“Since Muntaser and I are both from third-world countries that rely heavily on exports, this idea came up after a lot of discussion about our respective homes’ challenges with regards to exporting,” he added.

The student said the team finished the project using standard technology in about a month.

As per the Philippine Statistics Agency’s report, about 2.3 million Filipino families suffered from involuntary hunger in the first three months of 2019 alone — at least once a month. In the U.S., around 23.5 million citizens lack access to fresh produce.

To reduce these numbers and advance their advocacy, Banusing suggested that their solution should be implemented by companies themselves “either by licensing the tech or getting people like us to do it for them.”

However, the 19-year-old admitted that FreShip still has lots of room for improvement.

“The tech itself isn’t perfect just yet though, so we’re looking to improve upon it further then approach companies later. It’s feasible to implement, but still a departure from what’s present now,” he explained.

In a poverty-stricken country where eating “pagpag” is rampant among the poor, Banusing and his team’s creation may just be what the Philippines – and the whole world – needs to feed its people, instead of throwing food away. — with reports from Niña V. Guno/JB