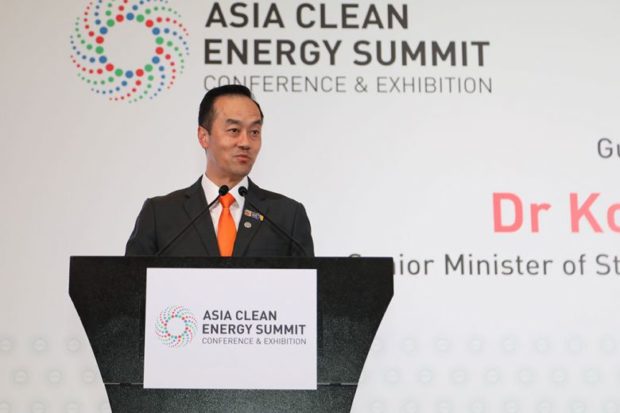 Senior Minister of State for Trade and Industry Koh Poh Koon announced that the recycling facility, named TES B, will be set up by global e-waste recycler TES in Singapore. PHOTO: SUSTAINABLE ENERGY ASSOCIATION OF SINGAPORE/FACEBOOK via The Straits Times/Asia News Network

SINGAPORE — A new facility for recycling lithium-ion batteries, found in mobile phones and electric vehicles, is set to open in Singapore.

Senior Minister of State for Trade and Industry Koh Poh Koon on Wednesday (Oct 30) announced that the recycling facility, named TES B, will be set up by global e-waste recycler TES in Singapore.

It is expected to cost about $20 million.

“This is an exciting development as the use of batteries for grid-related energy storage is projected to grow globally, to manage the increasing adoption of intermittent renewable energy such as solar,” said Dr Koh.

Dr Koh added that the recycling facility would allow precious metals from the lithium-ion batteries to be reused to make new batteries for products such as mobile phones and electric vehicles.

TES said such a closed-loop cycle would eliminate the need to continuously source raw materials and reduce reliance on global suppliers.

The company said a similar facility, Recupyl, will be set up in Grenoble, France.

In response to queries from The Straits Times, a spokesman for TES said that the Singapore facility, which is expected to be completed by February 2020, will recycle 14 tonnes of lithium-ion batteries, or the equivalent of about 280,000 smartphone batteries, each day.

The TES B facility will use in-house technology and equipment in the recycling process for the batteries.

The battery recycling process involves auto-punching machines and shredders that will first break down batteries, that have reached the end of their shelf life, into fine substances.

TES said that the process, which is environmentally friendly, does not release contaminants such as heavy metals or volatile organic compounds into the atmosphere.

The facility is expected to cover a land area of 10,000 sq m, which is the size of about two football fields.