Australians first to get hands on new iPad 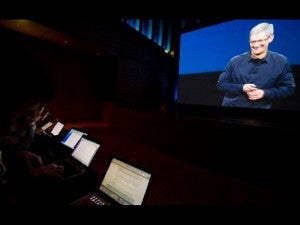 A screen projects a live feed of Apple CEO Tim Cook announcing the US launch of the Apple iPad 3, at an event in central London on March 7, 2012. Following the huge success of the two previous models, the iPad 3 builds on the developments with a faster processor and much higher screen resolution. AFP PHOTO / LEON NEAL

SYDNEY – Hundreds of gadget lovers laid siege to Apple’s flagship Sydney store Friday to be the first in the world to get their hands on the new iPad as the company’s shares in New York spiked above US$600.

Apple is looking to tighten its grip on the tablet market with its third generation launch, which boosts a more powerful processor, increasing pressure on competitors including Google to make devices more enticing.

The anticipation saw Apple shares briefly top $600 for the first time on Wall Street on Thursday before closing at $585.56. The stock has gained more than 50 percent in the past three months alone.

In scenes expected to be repeated worldwide in the nine other countries and territories launching the product, hundreds were gathered outside its Sydney store when it opened at 8:00 a.m. local time (2100 GMT Thursday).

But the first of the new iPads were not collected from Apple, instead from shops owned by Australian telecom giant Telstra in Sydney and Melbourne, which threw their doors open just after midnight.

While queues snaked through the city streets outside Apple’s Sydney store, the hype was not on the scale seen for the launch of iPad 2, when people began camping out up to four days before.

Only one person had staked his claim outside by mid-afternoon Thursday and he was being paid to do so.

Former truck driver Steve Parkes began his vigil on Monday after being offered Aus$950 (US$1,000) by a jobs site to line up wearing a T-shirt emblazoned with the employment company’s logo.

The free publicity garnered by an Apple launch seems to have caught on, with others donning promotional shirts in front of the barrage of television cameras.

Parkes, 37, admitted he had no interest in the iPad and was motivated by the cash.

“I admire them from afar, but I’ve got no great interest in Apple itself,” he said.

The new tablet is being released in Australia, the United States, France, Canada, Germany, Japan, Singapore, Switzerland, Britain and Hong Kong on Friday.

A key upgrade is its eye-grabbing screen resolution, or Retina display, which is on a par with that of an iPhone 4S and which Apple says is the sharpest ever on a mobile device.

It also boasts a more powerful processor and the ability to connect to the latest 4G LTE telecom networks that move data faster than their predecessors, as well as an improved camera.

The new tablet has generated good reviews worldwide but Rob Livingstone, an IT expert at Sydney’s University of Technology, said its success could be short-lived.

“It’s like any other technology, there’s always better, faster, sharper, newer five minutes after you’ve purchased the product you’ve just purchased, and the iPad’s no different,” he told Agence France-Presse.

While the almost cult-like status of Apple shows no signs of waning among consumers, he suggested that with Apple co-founder Steve Jobs now dead the momentum could start to taper off.

“It makes me wonder, now that Steve Jobs has passed on, how long that momentum will last because it’s a competitive world,” he said.

“You look at [Samsung’s] Galaxy and a whole range of competitors are coming on with some very compelling offers, and I think time will tell whether Apple will lose some of its gloss.”

Jobs, the mind behind the wildly popular iPod, iPad and iPhone devices, died in October after battling pancreatic cancer.