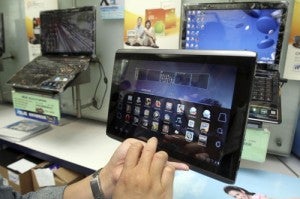 MANILA, Philippines—The House committee on information and communications approved on Monday a consolidated bill defining cyber-crimes and providing safeguards and penalties to protect the integrity and confidentiality of subscribers’ information.

The bill, which has yet to be numbered, substituted for at least nine related bills on the subject, and will be known as The Cyber-crime Prevention Act of 2011.

Taguig City Rep. Sigfrido “Freddie” Tinga, committee chair, said recognizing freedom of expression should involve recognizing the responsibility of preventing abuses in the exercise of rights and of protecting other forms of rights, such as privacy and confidentiality of certain types of information.

“This bill, if passed, will protect and safeguard not only the integrity of computer systems but also the veracity of database and confidentiality of data storing systems as well as all networks from misuse abuse and illegal access,” Tinga said.

The bill recognized the increasingly vital role of information and communications technology (ICT) as an enabler of key industries such as banking, broadcasting, business process outsourcing, electronic commerce and telecommunications, and as a driving force for the nation’s overall social and economic development.

It also cited the importance of providing an environment conducive to the development, acceleration and application of ICT to attain free, easy and intelligible access to exchange and/or delivery of information; and the need to protect and safeguard the integrity of computer and communications systems, networks and database, and the confidentiality, integrity and availability of information and data stored therein, from all forms of misuse, abuse and illegal access by making such conduct punishable under the law.

If enacted into law, the measure would penalize cyberstalking and defamation over social media.

Under the bill, cybercrimes offenses are categorized into offenses against the confidentiality, integrity and availability of computer data and systems, computer-related offenses, and content-related offenses.

Other offenses include aiding or abetting in the commission of a cybercrime and attempt to commit cybercrime.

Earlier during the hearing, Pampanga Rep. Gloria Macapagal-Arroyo and other committee members scolded representatives of the National Bureau of Investigation for proposing to remove the requirement of a court warrant before a telecommunications company can release the traffic logs of mobile phone users. Traffic logs contain information like call logs.

NBI Head Agent Migdonio Gonzon made this request for inclusion in the consolidated bill to no avail.

“You’re violating the law,” Arroyo, co-author of the bill, said to Gonzon in a raised voice.

“What’s the basis for the issuance of warrant? You cannot issue warrant just because you want to tap someone. It has to be defined otherwise, you have police state,” she said.

Arroyo likened the cyber-crime bill to the Visiting Forces Agreement between the Philippines and the United States with respect to jurisdiction or where participants could be held liable where crime was committed.

Tinga reminded the representatives of the telecom companies present in the hearing about the integrity and confidentiality of stored information of their clients.

* The definition of “cyber”;

* An amendment with regards to jurisdiction—removing limitation on the nationality of those involved and the coverage of the impact area of the crime;

* An amendment proposed by Tarlac Rep. Susan Yap deleting the portion defining cyber pornography and cyber-sex to include payments. (Deletion makes lewd exhibition on cyberspace per se a crime); and

* An amendment to include threats to life and threats to national security as limits/requirements for which a court order may be issued for the interception of data.

A cybercrime bill was approved by the House in the 14th Congress but failed to pass the Senate. The Senate version of the new bill, is now on second reading.

The new bill was approved after two technical working group meetings, and included a provision for the creation of an investigating arm under the office of the President.