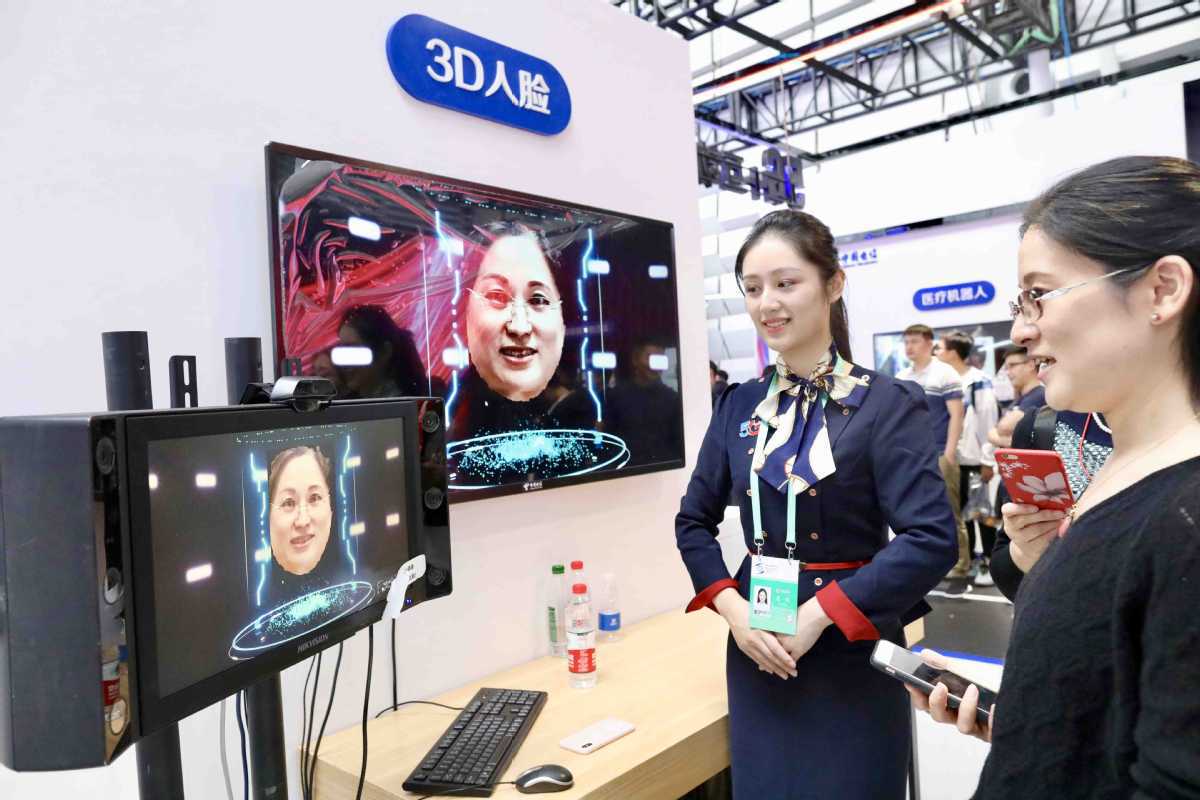 A visitor tries 3D facial recognition tech on Tuesday at the Light of Internet Expo of the sixth World Internet Conference in Wuzhen, Zhejiang province. [Photo by Zhu Xingxin/China Daily]

BEIJING — People in Zhengzhou, capital of Henan province, can now use the subway through facial recognition technology.

Introduced in September, facial recognition is available to passengers who link their online payment systems to the subway’s smartphone app.

However, one traveller, Feng Yi, 25, who works for a tourism company in the city, voiced his concerns. “I feel uncomfortable because I don’t know why the company is using my facial details, or whether they will be leaked,” he said.

“Scanning people’s faces in public places makes me feel unsafe, especially when the technology is being adopted elsewhere, such as banks, colleges and hotels.”

He also questioned the need to collect facial information, saying that when he registered online accounts, he provided his phone and identity card numbers and his fingerprints. “I can hardly refuse to use the technology, as it is a precondition or obligatory for using some apps,” he added.

Facial recognition is also being adopted in other cities. For example, Beijing subway authorities said last month that they were testing such a system in preparation for introducing it to help speed up security checks.

Heated debate on the legitimacy and ethics of using facial recognition spread on social media platforms after a face-swapping app named Zao allowed users to imitate celebrities from blockbuster movies or hit TV series through the use of artificial intelligence.

Zhao Zhanling, a legal researcher at the China University of Political Science and Law, said growing public concern over facial recognition is understandable.

“Compared with ID card and fingerprint information, facial recognition can help identify a person more accurately,” he said. “If such information is collected improperly or leaked, the risks will be considerable.”

Widespread use of the technology has heightened such concerns, because there is no law in China to regulate the use and collection of facial information, he said, suggesting that app operators, public service providers and government departments be more careful in preventing abuse of the science.

Li Ya, a lawyer from the Beijing Zhongwen Law Firm said, “The technology is no problem, but its adoption must be regulated before a special law is introduced.”

Guo Bing, an associate professor of law at Zhejiang Sci-Tech University, has the same concerns as Feng about the collection and use of personal information.

On Oct 28, Guo took the Hangzhou Safari Park to Fuyang District People’s Court in Hangzhou, capital of Zhejiang province, over the collection and use of visitors’ facial recognition details. Three days later, the court accepted the case. The litigation is believed to be the first in China involving such technology and comes as its use increases nationwide.

In April, Guo agreed to use fingerprint recognition to pay an annual fee of more than 1,000 yuan ($142) for an admission card to the park. But last month, the park told him its entry system was to be upgraded and card users had to supply facial information.

Yuan Xiaoqin, the park’s brand manager, was quoted by China Central Television as saying: “Facial recognition can help a visitor enter the park in two or three seconds. Fingerprint information sometimes isn’t sensitive, especially in cases of injury or when the fingers are too dry to enable recognition.”

However, Guo disagreed and asked the park to return his payment. “Consumers will face big risks if their facial information is leaked, used illegally or abused,” he said. “In collecting visitors’ facial information, the park has seriously harmed their rights, and it didn’t inform me about the upgrade when I registered the card.

“As a commercial business, the park will fall under suspicion of illegally collecting visitors’ personal data if it applies facial recognition technology without their permission,” he added.

Hou Guoji, a businessman from Xuzhou, Jiangsu province, said the demand for facial information should have been clarified when the park helped Guo register the card.

But he added that the technology can benefit people in daily life－for example, if they forget to carry their ID card at airports. “If the technology can be adopted in signing contracts or legal documents, I believe financial security will also be greatly improved,” he said.

Li, the lawyer, said the speed and convenience brought by the technology for security checks and verifying identities is undeniable.

Zhao, the legal researcher, said: “Efficiency or privacy? That’s the question in the fast-developing internet and technology era. With enhanced awareness of protecting personal information, the issue of better adopting technologies, including facial recognition, AI and deepfakes, must be urgently studied and regulated.”

Deepfakes refers to using an image of a person and replacing it with someone else’s likeness.

“If facial information is leaked, it will be hard to take effective compensatory measures,” Zhao said. “That’s why many users worry that such information may be collected unnecessarily or used improperly.”

Li said he can understand some complaints about the technology, “as it can seem excessive after people have provided ID card and mobile phone numbers, along with fingerprint details”.

Feng, from Zhengzhou, said: “There is too much being disclosed. It’s like being naked in public.”

He said the use of facial recognition technology by public security bureaus for investigative purposes is acceptable, “because I know why they collect the information and they also promise under their investigation rules not to release it and use it illegally”.

“But elsewhere, such as hotels and colleges… ID card numbers and fingerprint details should be sufficient to verify identities.”

Zhao said: “The use of facial information by institutions such as internet platforms and public service providers is akin to painting a person’s portrait or figuring out who the person is more accurately. But I think the need for such a portrait should be the main factor in applying the technology.”

Many netizens were attracted when Zao, the app, made its debut at the end of August, as it promised “amazing face exchanges”. But later, public enthusiasm waned on suspicion that the app was collecting an excessive amount of personal information.

An agreement for using the app, which sparked widespread controversy online, stated, “Before you upload or post any content, you agree to grant Zao, its affiliates and Zao users worldwide the right to irrevocably use your original photos, synthesized photo and videos for free and for good … and to make changes to the portraits of the original holders.”

Zhao said: “At least people can refuse the app if they don’t want their facial information disclosed, but sometimes such recognition is inevitable. For example, some businesses, banks and government departments have adopted the technology to check employees’ work attendance.”

He said there is no clear line governing who or which institution can collect people’s facial information. “Some collect it for security purposes, others for enhanced efficiency, or even for fun.”

Law on the way

Li said that although there is no specific law on the use of the technology and on protecting personal information, some Chinese legislation does relate to privacy protection.

For example, the Cybersecurity Law stipulates that people or institutions must make “legitimacy and necessity” a priority in collecting or using personal information, and should ensure transparency. The law also states that providers must be told how their information is used and why it is needed, and this should be based on agreement.

Feng said, “The onus on providing facial recognition details should rest with the person concerned, instead of he or she being forced to do so.”

Zhao said it was time China set a “threshold” for applying such technology and that supervision should be stepped up before the introduction of related laws.

In March, Zhang Yesui, spokesman for the second session of the 13th National People’s Congress, the country’s top legislature, placed legislation relating to protecting personal information on the agenda and said government departments and agencies were working on a draft law.

Gao Zicheng, a legislator and lawyer, said the drafting is a “must” but will require a significant amount of time, because it is difficult to define what personal data is and how much private information can be disclosed.

In addition, ensuring development of the technology while guaranteeing the security of personal information is a challenge, as there is no conflict between privacy protection and the legitimate collection or use of data, he said.