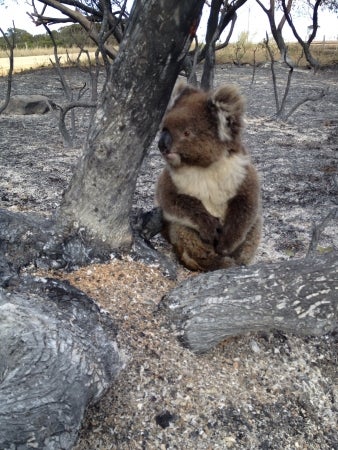 A koala who was saved from the bushfires in Australia last week was put to sleep today, Nov. 26, after his burns worsened.

The koala, named Lewis, made headlines across the globe after Toni Doherty, an elderly woman, braved a burning bushland to rescue him. Lewis sustained burns to his chest, stomach and feet from the incident.

Koala Hospital Port Macquarie, the facility where Lewis was treated after his rescue, shared the news of his passing via Facebook earlier today.

“Today we made the decision to put Ellenborough Lewis to sleep,” the hospital stated. “We placed him under general anaesthesia this morning to assess his burns injuries and change the bandages.”

Today we made the decision to put Ellenborough Lewis to sleep. We placed him under general anaesthesia this morning to…

The hospital previously explained that “burns injuries can get worse before they get better.” However, that was not the case for Lewis. The koala’s burns had gotten worse but “unfortunately would not have gotten better.”

“The Koala Hospital’s number one goal is animal welfare, so it was on those grounds that this decision was made,” the hospital explained.

In an earlier post, it said that the facility does not “keep koalas alive ‘to save their lives’ if this means pain and discomfort that is too much.”

“We were there this morning. We are naturally very sad about this, as we were hoping he’d pull through but we accept his injuries were severe and debilitating and would have been quite painful,” Toni’s husband, Peter, told Nine News today, on her behalf.

Because of the bushfires that have affected numerous koalas across Australia, the hospital has set up a GoFundMe page to develop a koala breeding facility to ensure that the species does not become extinct. Ryan Arcadio /ra

‘We owe you milk’: Firefighter leaves note after saving man’s house from bushfire