Newly discovered black hole so huge it ‘shouldn’t even exist’ 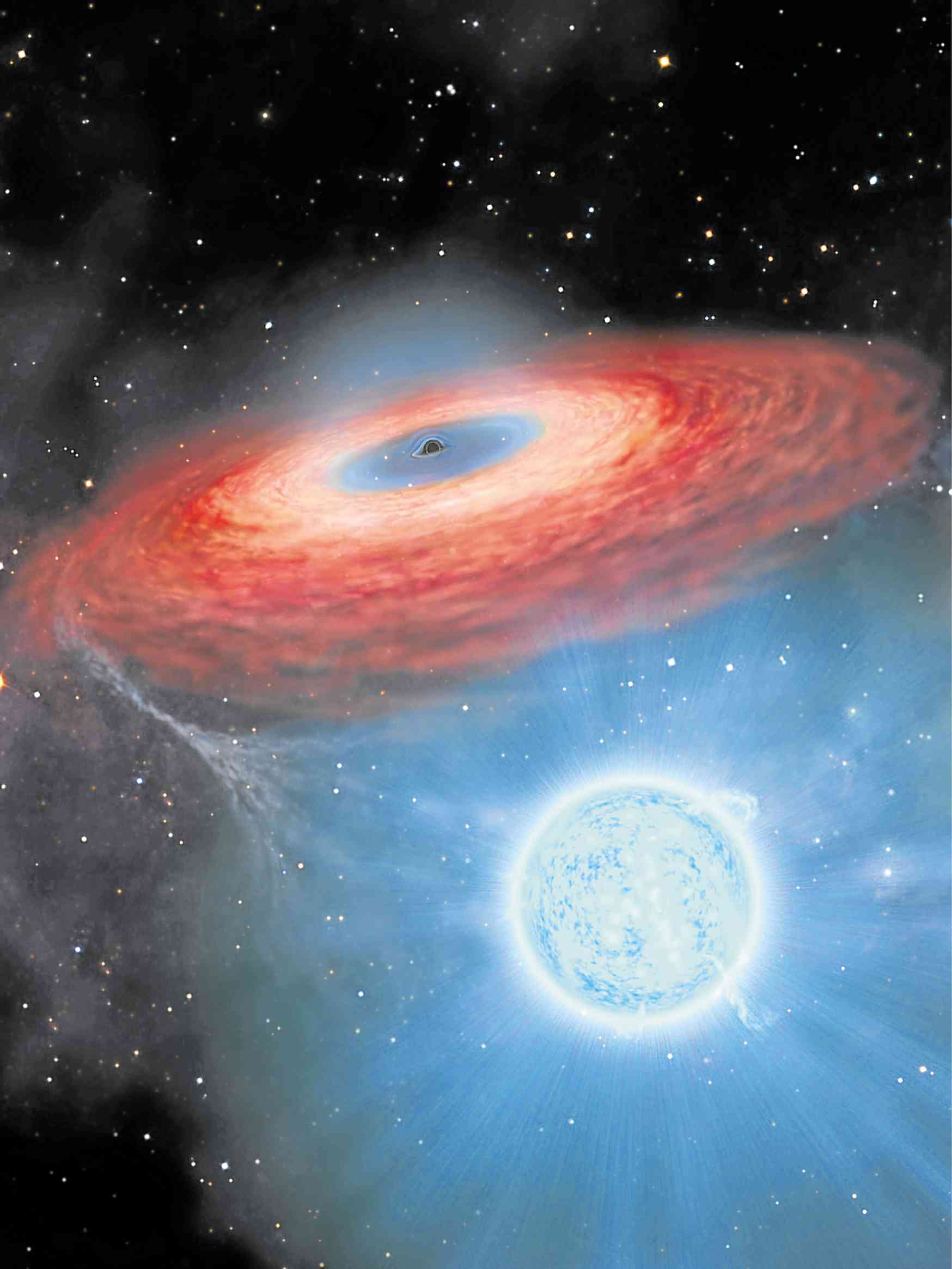 An artist’s rendering of the accretion of gas onto a stellar black hole from a companion star. —AFP

BEIJING—ASTRONOMERS have discovered a black hole in the Milky Way so huge that it challenges existing models of how stars evolve, researchers said on Thursday.

LB-1 is 15,000 light-years from Earth and has a mass 70 times greater than the sun, according to the journal Nature.

The Milky Way is estimated to contain 100 million stellar black holes but LB-1 is twice as massive as anything scientists thought possible, said Liu Jifeng, a National Astronomical Observatory of China professor who led the research.

“Black holes of such mass should not even exist in our galaxy, according to most of the current models of stellar evolution,” he added.

Scientists generally believe that there are two types of black holes.

The more common stellar black holes—up to 20 times more massive than the sun—form when the center of a very big star collapses in on itself.

Supermassive black holes are at least a million times bigger than the sun and their origins are uncertain.

But researchers believed that typical stars in the Milky Way shed most of their gas through stellar winds, preventing the emergence of a black hole the size of LB-1, Liu said.

“Now theorists will have to take up the challenge of explaining its formation,” he said in a statement.

Astronomers are still only beginning to grasp “the abundance of black holes and the mechanisms by which they form,” David Reitze, a physicist at the California Institute of Technology (Caltech) who was not involved in the discovery, told Agence France-Presse (AFP).

The Laser Interferometer Gravitational-Wave Observatory at Caltech, overseen by Reitze, had previously detected ripples in spacetime that suggested the possibility of black holes in distant galaxies that were much bigger than what was thought possible.

Stellar black holes are usually formed in the aftermath of supernova explosions, a phenomenon that occurs when extremely large stars burn out at the end of their lives.

LB-1’s large mass falls into a range “known as the ‘pair instability gap’ where supernovae should not have produced it,” Reitze said. “That means that this is a new kind a black hole, formed by another physical mechanism.”

Additional images from two of the world’s largest optical telescopes—Spain’s Gran Telescopio Canarias and the Keck I telescope in the United States—confirmed the size of LB-1, which the National Astronomical Observatory of China said was “nothing short of fantastic.”

Scientists have tended to find black holes by detecting the X-rays they emit.

But this method has limited usefulness because only a small number of black hole systems where the companion star orbits very close to the black hole would emit detectable X-rays, Liu said at a press conference.

Instead, the team that discovered LB-1 tracked the movements of “huge numbers of stars over a long period of time,” before identifying LB-1 based on the motion of its companion star, Liu said.

This method has been used for decades without much success due to the limitations of the available equipment, Liu added.

But LAMOST, constructed between 2001 and 2008 in north China’s Hebei province, allows researchers to detect up to 4,000 stars simultaneously with each exposure, making it one of the world’s most powerful ground-based telescopes.

Liu told AFP the method used to discover LB-1 could help scientists identify many more black holes in the future.

Out of the 100 million black holes believed to exist in our galaxy, Liu said, only 4,000 “can give you X-rays that can be detected by us.”