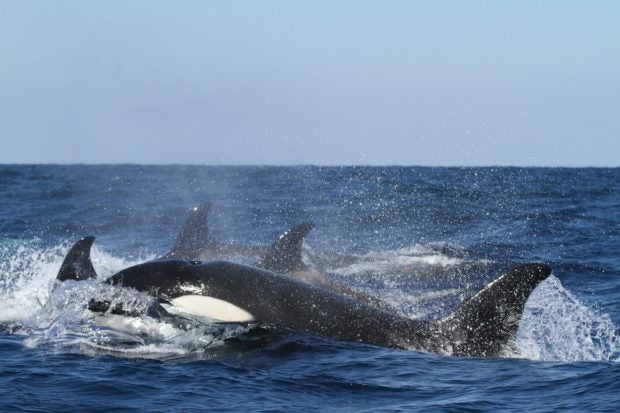 Killer whales have shown the “grandmother effect”: “Post-reproductive grandmothers lead the group around foraging grounds, and that they are important in doing that in times of need, when the salmon are scarce.” Image: Unsplash

Orca females stop reproducing in their thirties or forties but can continue to live for decades more, a phenomenon known only to exist in humans and four other mammal species, all of which are whales.

It has been suggested that the trait evolved because it allowed post-reproductive females to help their wider kin — referred to as the “grandmother effect” in people, but the theory had not been tested in whales until now.

“This is the first non-human example of the grandmother effect in a menopausal species,” senior author Daniel Franks from the University of York told AFP.

“It has also been shown in elephants, but they are able to reproduce until the end of their lives. We currently know of only five species that go through menopause: the others are short-finned pilot whales, narwhals and beluga.”

Writing in the Proceedings of the National Academy of Sciences, Franks and colleagues examined more than 40 years of census data on two killer whale groups off the coasts of the U.S. state of Washington as well as Canada’s British Columbia.

The individuals were identified by their unique fin shapes, saddle patches and the presence of nicks and scratches, and sexed by the distinct pigmentation around their genitals as well as adult fin size.

Their relations to one another were inferred through observations of social organization, and mothers identified by their repeated association with their young calves.

The team, which also included scientists from the University of Exeter, the U.S. Center for Whale Research and Canada’s Pacific Biological Station, focused on 378 individuals known to have a maternal grandmother.

They found that those whose grandmother died within the last two years had a mortality rate 4.5 times higher than those with a living grandmother, in the two years following her death.

The effect was significantly amplified in years of fish scarcity, which the researchers judged through data on annual catches of Chinook salmon, and diminished in years of plenty.

“We have previously shown that post-reproductive grandmothers lead the group around foraging grounds, and that they are important in doing that in times of need, when the salmon are scarce,” Franks explained.

“They are also known to directly share food with younger relatives. We also suspect babysitting,” he added.

While the researchers identified a grandmother effect was at play, these benefits alone do not explain why orca females lose reproductive capacity at midlife: elephant grandmothers help their grandchildren too while continuing to breed until they die.

The team wrote that continued reproductive capacity might come at a cost for whales and for humans, such as intergenerational conflict between mothers and their daughters in competition for males.

“In killer whales, when mothers and daughters cobreed, the calves of mothers from (the) older generation have significantly higher mortality,” the paper said.

Moving forward, the researchers would like to hone in more precisely on how members of the close-knit family-based species help and harm each other, using drones to examine these behaviors. NVG