Why thousands of ‘penis fish’ appeared on a beach

California residents were shocked to find thousands of sausage-like creatures cover a beach after a storm. Little did they know that the species of spoonworm had been just beneath their feet all along.

The phallic worm is better known as, well, penis fish. For those who would rather not make mention of genitalia, it is also called fat innkeeper worm.

The marine worm makes U-shaped burrows in a beach or mudflat, leaving most beachgoers unaware of their existence. However, a storm that hit Drakes Beach in California last Dec. 6 washed away sand and revealed the penis fish, reported Bay Nature on Tuesday, Dec. 10.

The magazine shared pictures of the worms on its Instagram to show the stranding on the beach, as well as how it looks up close.

SHOOK 😳 Thousands of these marine worms—called fat innkeeper worms, or “penis fish”—were found on Drake’s Beach last week! These phallic organisms are quite common along the West coast of North America, but they spend their whole lives in U-shaped burrows under the sand, so few beachgoers are aware of their existence. ⛈🌊 A recent storm in Northern California brought strong waves that washed away several feet of sand from the intertidal zone, leaving all these fat innkeeper worms exposed on the surface. 🏖 Next time you go to the beach, just think about the hundreds of 10-inch, pink sausages wiggling around just a few feet under the sand. 🙃 . . Get the full story in our new #AsktheNaturalist with @california_natural_history via link in bio! (📸: Beach photo courtesy David Ford; Worm photo by Kate Montana via iNaturalist)

There are only four species of the worms, which are also called penis fish or fat innkeeper worms. The species in North America is the Urechis caupo, which is about 10 inches long.

Its counterpart in South Korea, the Urechis unicinctus, is eaten raw; it is called gaebul. The spoonworm is a detritivore, meaning it eats detritus like plankton and bacteria. 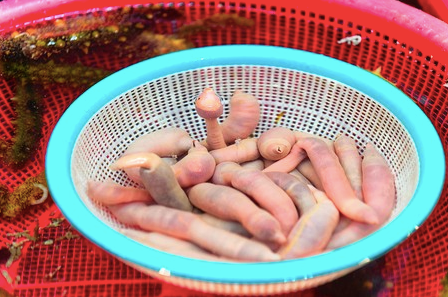 Were it not for the storm, the pink worm would have stayed underground, away from the eyes of humans who might wonder why sexual organs are pulsing in the sand.  Niña V. Guno /ra

LOOK: Man pulls massive moving tapeworm out of his butt