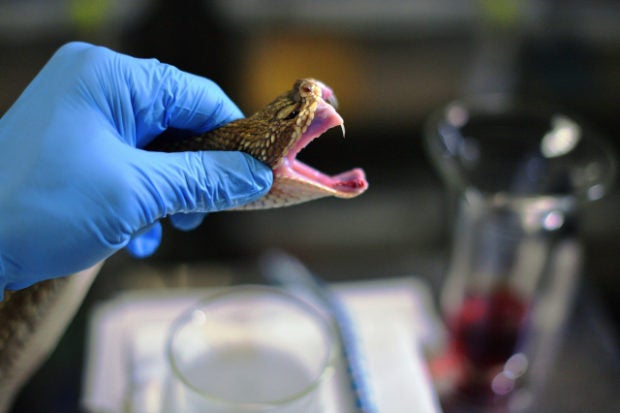 An expert extracts venom from a rattlesnake at the Butantan Institute in Sao Paulo, Brazil, on Nov. 12, 2019. Image: AFP/Carl de Souza

Gripping the deadly snake behind its jaws, Fabiola de Souza massages its venom glands to squeeze out drops that will save lives around Brazil where thousands of people are bitten every year.

De Souza and her colleagues at the Butantan Institute in Sao Paulo harvest the toxin from hundreds of snakes kept in captivity to produce antivenom.

It is distributed by the health ministry to medical facilities across the country.

Dozens of poisonous snake species, including the jararaca, thrive in Brazil’s hot and humid climate. Nearly 29,000 people were bitten in 2018 and more than 100 died, official figures show.

States with the highest rates of snakebite were in the vast and remote Amazon basin where it can take hours to reach a hospital stocked with antivenom.

Venom is extracted from each snake once a month in a delicate and potentially dangerous process.

Using a hooked stick, de Souza carefully lifts one of the slithering creatures out of its plastic box and maneuvers it into a drum of carbon dioxide.

Within minutes the reptile is asleep.

The snake is then placed on a stainless steel bench in the room where the temperature hovers around 27 degrees Celsius (80 degrees Fahrenheit).

De Souza has a few minutes to safely extract venom before the snake begins to stir.

“It’s important to have fear because when people have fear they are careful,” she says.

The snakes are fed a diet of rats and mice that are raised at the leafy institute and killed before being served up once a month.

After milking the snake, de Souza records its weight and length before placing it back in its container.

The antivenom is made by injecting small amounts of the poison into horses — kept by Butantan on a farm — to trigger an immune response that produces toxin-attacking antibodies.

Blood is later extracted from the hoofed animals and the antibodies harvested to create a serum that will be administered to snakebite victims who might otherwise die.

Butantan project manager Fan Hui Wen, a Brazilian, says the institute currently makes all of the country’s antivenom — around 250,000 10- to 15-milliliter vials per year.

There are now plans to sell the life-saving serum abroad to help relieve a global shortage, particularly in Africa.

About 5.4 million people are estimated to be bitten by snakes every year, according to the World Health Organization (WHO).

Between 81,000 and 138,000 die, while many more suffer amputations and other permanent disabilities as a result of the toxin.

To cut the number of deaths and injuries, WHO unveiled a plan earlier this year that includes boosting production of quality antivenoms.

Brazil is part of the strategy. It could begin to export antivenom as early as next year, Wen says.

“There is interest for Butantan to also supply other countries due to the global crisis of antivenom production,” she says. RGA

Man bites snake into pieces after it attacked him