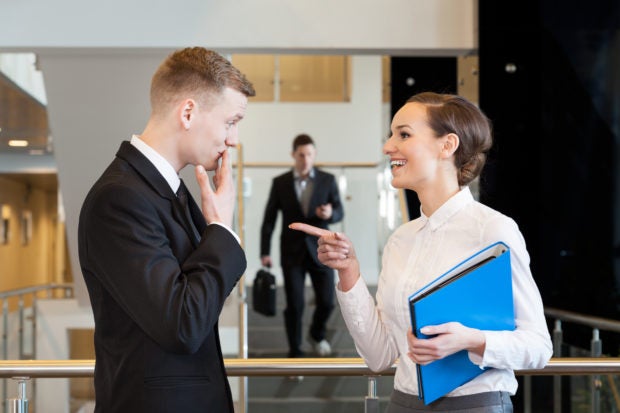 Casual flirting, such as compliments and jokes, with colleagues at work may help reduce one’s stress levels, a new study suggests.

Author Leah Sheppard, an assistant professor at Washington State University, shared the findings after conducting a series of surveys with hundreds of workers in the US, Canada and the Philippines.

Together with her co-authors Jane O’Reilly, Marius van Dijke, Simon Lloyd D. Restubog and Karl Aquino, she examined how people responded to non-harassing social sexual behaviors, such as coy glances and compliments, in the workplace.

They discovered that the majority of their survey participants were neutral about sexual banter but had positive opinions on compliments and provocative looks.

“What we found is that when flirtation is enjoyed, it can offer some benefits: it makes people feel good about themselves, which can then protect them from stressors in their lives,” Sheppard said in a statement.

The study also pointed out that light-hearted flirting such as compliments and banter are different from unwelcome acts of sexual harassment, which can cause or increase stress.

Sheppard and her colleagues argued that excessively strict policies meant to stop sexual harassment can inadvertently give the impression that all forms of social sexual behavior, even potentially beneficial ones, must be monitored and punished.

“Zero-tolerance rules can add awkwardness into what are pretty naturally occurring behaviors within established friendships,” said Sheppard. “At the same time, we’re not encouraging managers to facilitate this behavior. This is just something that probably organically happens.”

“Managers also should be careful in engaging in flirtation themselves, especially with anyone at a lower level,” she stressed. “As soon as there’s a power imbalance, you risk entering the domain of what might be perceived as sexual harassment.”  /ra