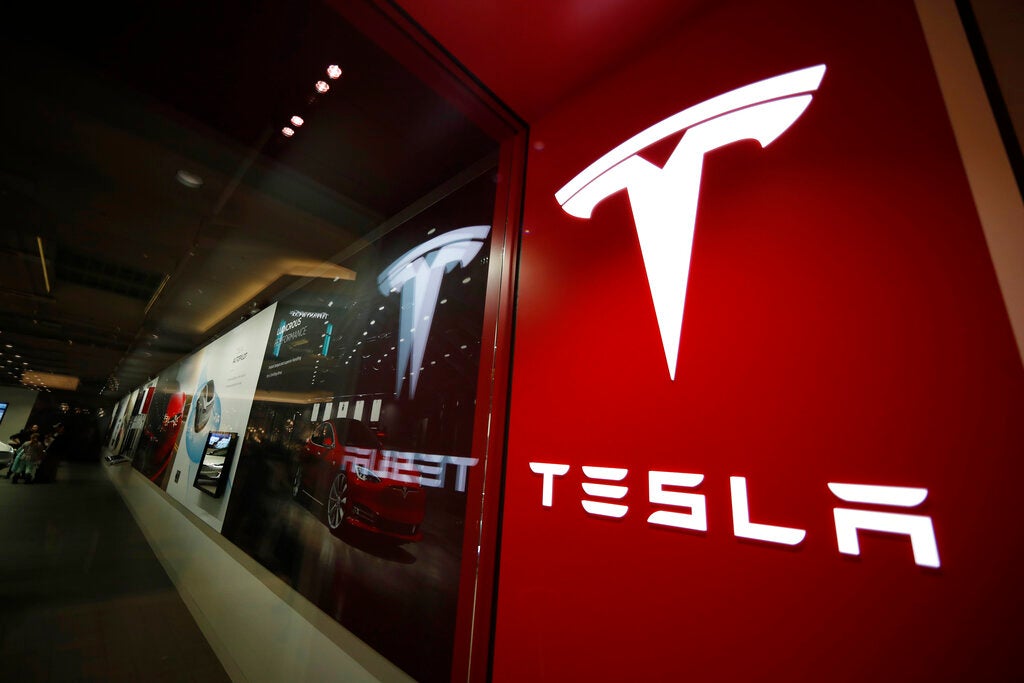 A Tesla store in Cherry Creek Mall in Denver (AP)

DETROIT — Speed of over a hundred miles per hour on a curve caused a 2018 crash and fire in Florida that killed the teenage driver of a Tesla Model S and a passenger, federal investigators have concluded.

The National Transportation Safety Board, in a report released Thursday, said the battery-powered car erupted in flames after colliding with a wall, trapping two 18-year-olds. Firefighters were unable to rescue the two despite putting out the blaze less than a minute after they arrived.

Injuries from the fire that started in the car’s lithium-ion battery contributed to the two deaths, although the passenger had head and torso injuries, according to the report.

The agency opened its probe of the May 8, 2018 crash in Fort Lauderdale as part of a broader inquiry into electric vehicle crashes and fires.

The crash killed the driver, Barrett Riley, 18, and Edgar Monserratt Martinez, 18, a front-seat passenger. Another teen was thrown from the car and injured. Families of the teens who were killed have sued Tesla.

Firefighters who arrived within two minutes of being called reported intense flames and that they could see electrical arcing in the car. They attacked the fire with water and foam but could not save the two passengers inside. Pieces of the battery broke off from the vehicle.

The car and debris were loaded onto tow trucks.

“During that operation, modules that had separated from the battery ignited on the tow truck when workers passed a chain over them,” the NTSB report stated. The fires extinguished by themselves, but when the car was loaded onto a different truck, the battery caught fire again and had to be put out by the fire department.

When the battery and modules were being unloaded at the tow yard, the case and modules reignited once again, but the fire burned itself out, according to the report.

The youths were returning from a trip to a nearby mall when the crash occurred on a road with a 30 mph (48 kph) speed limit and a sign warning drivers to go 25 mph (40 kph) around the curve, the report said. The Tesla was going 116 mph (187 kph).

The driver lost control while passing another vehicle, according to the report. The high-performance version of the Model S hit a curb and a wall, and the battery caught fire, it said.

After the ticket, the youth’s father stopped him from driving the car and asked Tesla if it could restrict the car’s speed. Employees at a Tesla store put the vehicle into “loaner” mode, limiting it to 85 mph (137 kph).

But in April, Tesla restored the car to normal speed mode at the request of the teen, who was able to make service decisions on the car, the report stated.

Batteries like those used by Tesla and other electric cars can catch fire and burn rapidly in a crash, although Tesla has said its vehicles catch fire far less often than those powered by gasoline.