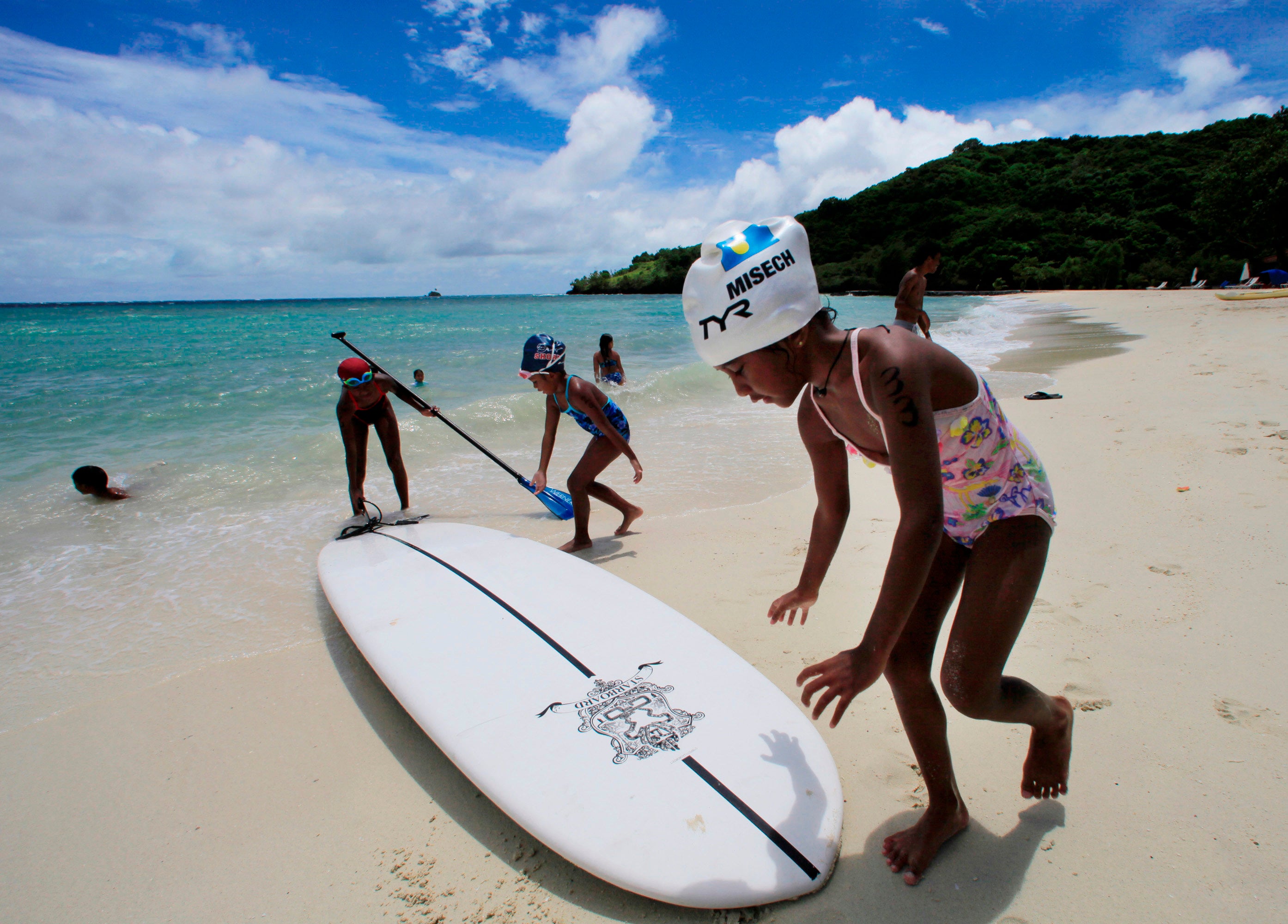 FILE – In this June 13, 2009 file photo, children play at a resort beach in Ngerkebesang, Palau. In an attempt to protect the coral reefs that divers so admire they have dubbed them the underwater Serengeti, the Pacific nation of Palau has banned many types of sunscreen. Banned sunscreens will be confiscated from tourists who carry them into the country, and merchants selling the banned products will be fined up to $1,000. (AP Photo/Itsuo Inouye, File)

“We have to live and respect the environment because the environment is the nest of life, and without it nobody in Palau can survive,” President Tommy Remengesau told AFP as the new laws took effect.

Palau, which lies in the western Pacific about halfway between Australia and Japan, is renowned for its marine life and is regarded as one of the world’s best diving destinations, but the government is concerned its popularity is coming at a cost.

Remengesau said there was scientific evidence that the chemicals found in most sunscreens were toxic to corals, even in minute doses.

With Palau’s popular dive sites regularly packed with tourists, there were concerns a build-up of these chemicals would irreparably harm the reefs.

From New Year’s day, any reef-toxic sunscreen imported or sold in Palau will be confiscated and the owner will be fined US$1,000.

“When science tells us that a practice is damaging to coral reefs, to fish populations, or to the ocean itself, our people take note and our visitors do too,” Remengesau said.

“Toxic sunscreen chemicals have been found throughout Palau’s critical habitats, and in the tissues of our most famous creatures.

“We don’t mind being the first nation to ban these chemicals, and we will do our part to spread the word. With better education and awareness, more jurisdictions will have the confidence to take this necessary action.

“The science is clear, and once that message has spread, we will be the first of many.”

Along with the sunscreen ban, Palau’s much-touted marine sanctuary came into effect on January 1, closing 80 percent of its exclusive economic zone (EEZ) to fishing and other marine activities including mining and shark finning.

“It is a very ambitious and worthy goal for Palau’s future,” Remengesau said. The marine sanctuary prohibits commercial fishing in about 500,000 square kilometers (190,000 square miles) of the ocean.

The legislation also requires most foreign fleets working in the limited fishing area to land their catch in Palau and then pay an export tax.

Environment Minister Umiich Sengebau said the law ensures Palau has the first rights to purchase fish caught in the area to satisfy the local demand before exports are allowed.

Remengesau said the ban was needed to “let the ocean heal” after years of mass commercial fishing in the Pacific that has seen stocks of some species such as bluefin tuna fall to critical levels.

It follows Palau’s establishment of the world’s first shark sanctuary in 2009 to prevent finning — a practice that sees fish have their fins hacked off before they are thrown back into the sea to die.