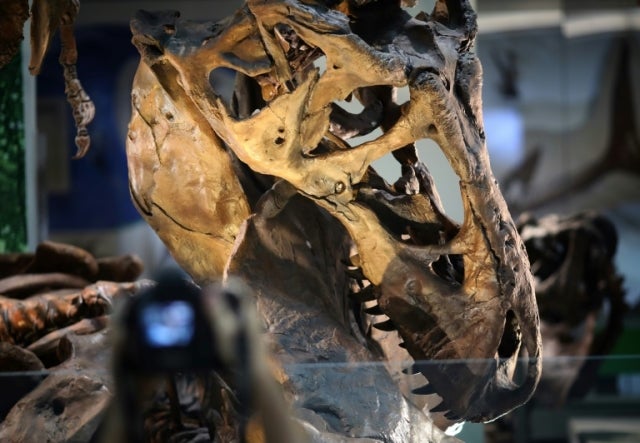 A team of researchers has discovered new information about the Tyrannosaurus Rex aging process after determining that a pair of skeletons were adolescent T-rex, not a different species altogether. Image: WIN MCNAMEE – GETTY IMAGES NORTH AMERICA/AFP/File

For three decades, paleontologists the world over have been split over a provocative finding: did a dwarf species of Tyrannosaurus rex really once exist?

In 1988, paleontologist Robert Bakker and his colleagues at the Cleveland (Ohio) Museum of Natural History reclassified a specimen first discovered in 1942 and displayed at the museum.

It was, they said, the first known member of a small new species they baptized as the Nanotyrannus.

Then, in 2001, another team discovered the nearly complete skeleton of a small Tyrannosaurus near the town of Ekalaka in Montana, in the rich and intensively studied fossil formation known as Hell Creek.

They named the creature — barely bigger than a draft horse — Jane and soon classified it as a juvenile Tyrannosaurus rex.

But a minority of specialists continued to insist that it was part of the newly classified Nanotyrannus species. They pointed to the morphology of its skull and bones, which they said differed from T-rex adults.

Answers in the bones

In a study published Wednesday in the journal Science Advances, researchers led by Holly Woodward of Oklahoma State University performed a microscopic analysis on samples from the interior of Jane’s tibia and femur bones, as well as from a less complete set of bones from an animal dubbed Petey.

This technique, known as paleohistology, confirmed that the two were immature individuals, not adults, the scientists said.

By extension, the study’s authors said, the existence of the Nanotyrannus seems very unlikely.

“The really cool thing about fossil bones is that a whole bone fossilizes even down to the microscopic size,” Woodward told AFP.

“We can infer growth rate, age (and) maturity level.”

The researchers took extremely fine slices from the bone samples, so thin that light could pass through them, and then studied them under powerful microscopes.

The size of the blood vessel openings revealed that the two dinosaurs were still in a phase of rapid growth at the time of death. Had they been adults, this vascularization would have been less prominent.

Only a half-dozen specimens

The team was also able to count the growth rings in each animal’s bones, much as one can do to determine the age of a tree: 13 years for Jane, and 15 for Petey.

The study adds to scientists’ still limited knowledge of the 20-year period between a dinosaur’s hatching and its adulthood.

Jane, who weighed only one ton, died before reaching the phase of exponentially rapid growth that normally would have brought her to an adult weight of just under 10 tons.

“Everyone loves T-rex, but we don’t really know much about how it grew up,” Woodward said. “It’s probably the most famous dinosaur in the world, and we mostly just have really large skeletons of it.”

That is partly due to the obsession of collectors and the public with finding and displaying the most enormous T-rex skeletons possible, unearthed sometimes to the detriment of smaller specimens.

Unfortunately, Woodward said, only five to seven fossils of young T-rex dinosaurs are known to exist in the world, and some of those are in private collections not accessible to researchers. NVG