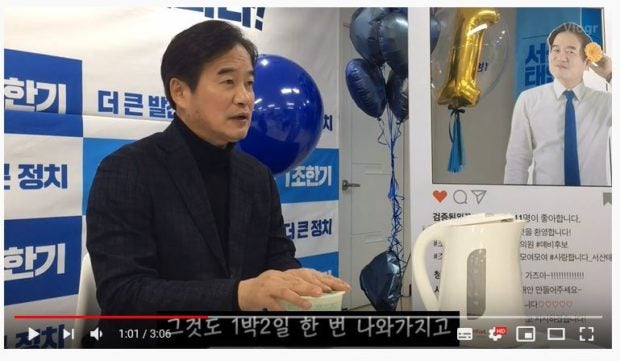 SEOUL — The coronavirus is forcing general election candidates to find ways to reach voters apart from street canvassing, with many turning to social media.

Campaign rally events often involve face-to-face conversations, handshakes and canvassing trucks with loudspeakers blaring music at places with a large flow of people and dense crowds. But fears over the contagious disease are driving candidates to run online campaigns.

The ruling Democratic Party of Korea has suggested party leaders suspend election campaigns that mobilize party members, while the main opposition Liberty Korea Party has notified its preliminary candidates to avoid direct contact with voters. As of Tuesday, South Korea has confirmed 16 cases of infection.

Large election-related events, such as the opening ceremony of election offices and the launch of election campaign committees, have been postponed.

With less than three months to go before the April 15 general elections, the ruling party is conducting a preliminary candidate preference survey, which will have an effect on finalizing the party’s candidates for the elections.

Democratic Party preliminary candidate Cho Han-ki, who seeks to run in Seosan and Taean, South Chungcheong Province, said he would refrain from attending large-scale events and gatherings until the situation settles, as he prioritizes the people’s health and safety.

“I will communicate more actively by conveying messages such as the announcement of pledges through social media,” he said.

Rep. Sung Il-jong of the Liberty Korea Party delayed his preliminary candidacy registration, to make efforts to fend off the coronavirus in Seosan and Taean, where he will seek a second term.

“I will postpone the election schedule, including registration for preliminary candidates, in order to start 24-hour emergency response systems to prevent the spread of the new coronavirus,” he said in a statement.

Political rookie Kim Han-kyu, who seeks a first term in Bucheon, Gyeonggi Province, has posted a series of cartoons — in which he is the main character — on his Facebook account, focusing on policies for the youth and environment.

“I’m desperate to meet more people as a political rookie who cannot waste a second, but citizens’ health and safety are the priority,” he wrote on his Facebook page.

The Democratic Party’s Shin Jeong-hoon, who seeks to run in Naju and Hwasun, South Jeolla Province, has made policy pledges through videos on YouTube, based on civil complaints that he received via social media.

Preliminary candidacy registration opens through March 25 for the April 15 general elections for the 21st National Assembly. Official candidate registrations will be received on March 26.