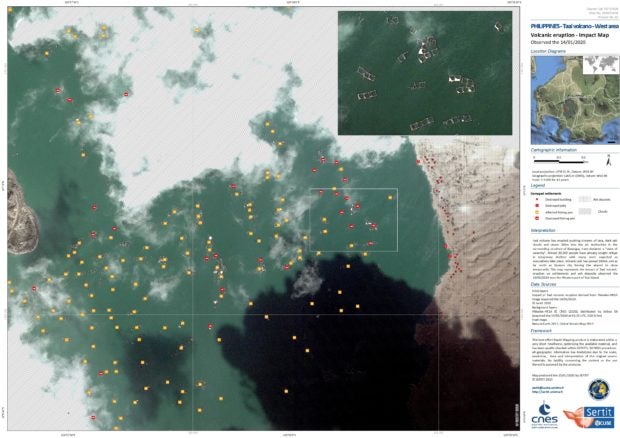 MANILA, Philippines–The European Union Delegation to the Philippines is holding a second national conference on its flagship space program Copernicus, whose mapping technology was utilized during Taal Volcano’s recent activity.

The conference, titled “Copernicus – a strategic partner for Earth Observation and sustainable development”, will be held Thursday at the Diamond Residencies Hotel in Makati.

“The conference will highlight prominent aspects for science, innovation and technology to support sustainable development and will discuss the many benefits of satellite remote sensing and space data management for disaster management, environmental protection, and climate change adaptation,” the EU Delegation to the Philippines said in a statement.

“It will also serve as a platform to enable agencies, organizations and multiple stakeholders in the Philippines to engage more closely with the European space sector,” it added.

Tthe European Union Delegation to the Philippines has been working very closely with the Department of Science and Technology since early 2019 to develop a national capacity support program on Copernicus for the Philippines.

This prospective new cooperation aims to address the key objectives of the Philippine government to develop and utilize Earth Observation satellite applications to enhance hazard management and disaster mitigation strategies and to further strengthen the country’s resilience to climate change.

Copernicus is EU’s flagship space program, which monitors and provides vital information on the Earth’s environment and its many ecosystems from integrated space and ground-based airborne and seaborne-measured data.

The technology was also tapped during Habagat flooding in 2012 and other typhoons that hit the country like Yolanda (Haiyan in 2013), Landao (Koppu in 2015), Ompong (Mangkhut in 2018).

The information generated from the Copernicus Programme help in strengthening the implementation of risk reduction measures at the local level.

Dr. Philippe Brunet, former EU Director for Space Policy, Copernicus Programme and Defence and now Principal Advisor to the European Commission Directorate for Cooperation and DOST Secretary Fortunato de la Peña will provide keynote addresses from the European Commission and the government of the Philippines while Rafael de Bustamante, Chargé d’Affaires, a.i. of the EU Delegation to the Philippines, will open the conference.

Inquirer calls for support for the victims of Taal volcano eruption
Responding to appeals for help, the Inquirer is extending its relief to the families affected by the recent eruption of Taal volcano.
Cash donations may be deposited in the Inquirer Foundation Corp. Banco De Oro (BDO) Current Account No: 007960018860.
Inquiries may be addressed and emailed to Inquirer’s Corporate Affairs office through [email protected]

Despite warnings from experts, Palace insists use of rapid antibody tests