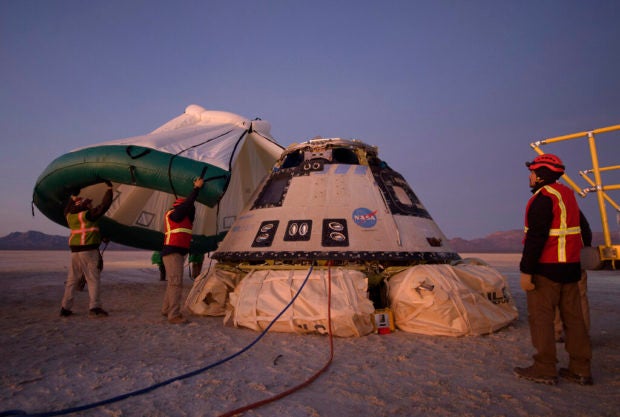 Boeing, NASA, and U.S. Army personnel work around the Boeing Starliner spacecraft shortly after it landed in White Sands, New Mexico. On Friday, Feb. 7, 2020, NASA said defective software could have doomed the crew capsule during its first test flight that ended up being cut short. (NASA via AP)

CAPE CANAVERAL, Florida — Defective software could have doomed Boeing’s crew capsule during its first test flight, a botched trip that was cut short and never made it to the International Space Station, NASA and company officials said Friday.

The Starliner capsule launched without astronauts in December, but its automatic timer was off by 11 hours, preventing the capsule from flying to the space station as planned. This software trouble — which left the capsule in the wrong orbit just after liftoff — set off a scramble to find more possible coding errors, Boeing officials said.

Hours before the Starliner’s scheduled touchdown, a second software mistake was discovered, this time involving the Starliner’s service module. Flight controllers rushed to fix the problem, which could have caused the cylinder to slam into the capsule once jettisoned during reentry.

Such an impact could have sent the Starliner into a tumble, said Jim Chilton, a senior vice president for Boeing. In addition, damage to the Starliner’s heat shield could have caused the capsule to burn up on reentry, he noted.

He also conceded they wouldn’t have found the second problem without the first.

“Nobody is more disappointed in the issues that we uncovered … than the Starliner team,” said Boeing program manager John Mulholland.

These latest findings stem from a joint investigation team formed by NASA and Boeing in the wake of the aborted test flight. The capsule returned to Earth on Dec. 22 after just two days, parachuting down to a landing in New Mexico.

The mission was supposed to be the company’s last major hurdle before launching the first Starliner crew.

NASA has yet to decide whether Boeing should conduct another test flight without a crew, before putting astronauts on board. Just in case, Boeing reported last week that it took a $410 million charge in its fourth-quarter earnings, to cover a possible mission repeat.

Douglas Loverro, head of NASA’s human exploration and operations mission directorate, said Boeing needs to check and verify all of its flight software before any decisions are made on a possible reflight. He told reporters NASA shares some of the blame for the software problems.

“Our NASA oversight was insufficient. That’s obvious and we recognize that,” he said.

The investigation team also is looking into a third problem, an intermittent space-to-ground communication problem that hampered controllers’ ability to command and manage the capsule early in the flight. Interference from cellphone towers may have exacerbated the matter, Boeing officials said.

NASA said the independent review should be completed by the end of February.

Outside of this ongoing review, NASA is taking an extensive look at Boeing’s culture, according to Loverro. He said it was prompted in part by software issues elsewhere in the company, an apparent reference to the grounded 737 Max fleet.

A second private company is on track to launch astronauts for NASA as early as this spring. SpaceX successfully completed a launch abort test last month at Cape Canaveral.

NASA astronauts have not launched from home soil since the space shuttle program ended in 2011, instead riding Russian rockets to get to the space station. The Soyuz seats go for tens of millions of dollars apiece.

NASA has been paying billions of dollars to Boeing and SpaceX to develop capsules capable of transporting astronauts to and from the space station. Even before Boeing’s software issues, the commercial crew flights were years behind schedule. The space agency deliberately opted for two companies for redundancy, an advantage cited repeatedly Friday by NASA Administrator Jim Bridenstine.