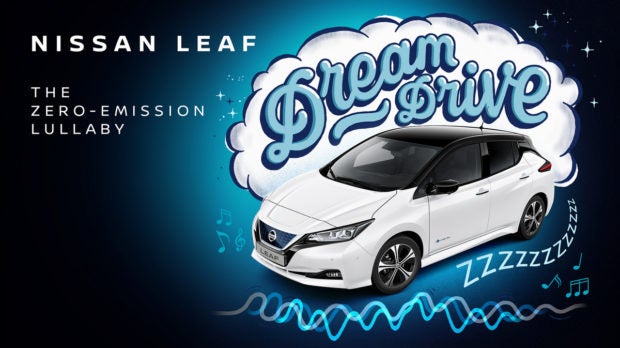 To help the parents who depend on short car rides to lull their baby to sleep, Nissan has developed the Leaf Dream Drive, an album designed to lull babies to sleep to the sounds of a humming engine without the accompanying emissions.

On Monday, Nissan introduced the album and referred to it as “the world’s first zero-emission lullaby.”

Instead of parents having to rely on driving around their baby in a gas-powered vehicle to lull them to sleep – therefore producing unnecessary emissions – Nissan put the sounds of a combustion engine into a soundtrack. While research revealed that parents often believe that it’s the vehicle’s movement that encourages sleep, “in fact it is the soothing sound frequencies of an internal combustion engine (ICE) that is the biggest contributor to a child falling asleep in the car.”

Naturally, as the Nissan Leaf is powered by an electric powertrain, taking babies out for a spin doesn’t have the same soothing effect as an ICE car, which is why this soundtrack was created specifically for the model.

The “kryptonite album for angry babies” consists of five three-minute tracks containing the sound frequencies and rhythms of a combustion engine that can be played in a battery-powered vehicle.

The Leaf Dream Drive soundtrack is available on Apple Music, Spotify, SoundCloud, YouTube, and Deezer. Parents can play the lullaby in the car by connecting their smartphone to the in-vehicle infotainment system. IB/NVG