Known as the province of Bulacan’s first officially declared city, San Jose Del Monte (SJDM) will soon be able to boast of an internet connection that’s easier, faster, and free! With free Internet powered by Globe’s GoWiFi services, the city of over half a million constituents can soon enjoy more of their favorite content and online activities within key locations in their community.

This is made possible through a Memorandum of Agreement (MOA) signing recently held at the Activity Center of San Jose Del Monte. The ceremony was led by Albert De Larrazabal, Chief Commercial Officer at Globe and  Hon. Arthur Robes, Mayor of San Jose Del Monte in the presence of other Globe executives and local government officials.

GoWiFi, the country’s largest WiFi service, continues its expansion plans nationwide, particularly in high-traffic areas like malls, hospitals, and schools to make high-quality internet connection accessible and affordable to more Filipinos. As of the first half of the year, the service is now accessible in 2,700 sites nationwide.

GoWiFi services are available in regular (free) GoWiFi and premium (paid) GoWiFi Auto, both available to all users with any WiFi-enabled device regardless of network service provider . To connect to Free GoWiFi, just open the Wi-Fi-enabled device’s WiFi settings, connect to the SSID “@FreeGoWiFi” or “@<site>_FreeGoWiFi,” register and wait for the SMS verification code, then select a WiFi offer, confirm and start surfing. 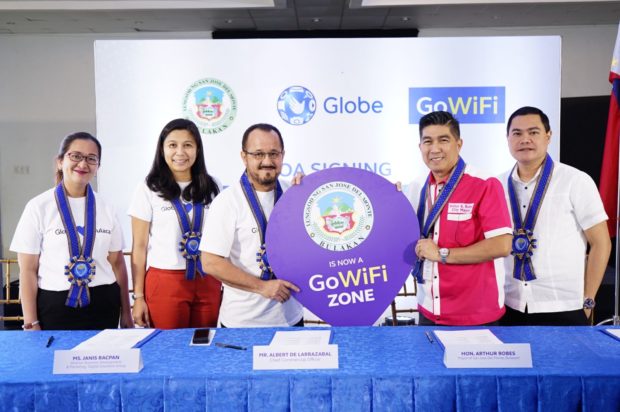 As a bonus, Globe Prepaid & TM customers can enjoy 1GB of free GoWiFi for every registration of GoSAKTO, GoSURF & EasySURF worth P50 and above that they can use in any GoWiFi hotspot! Globe Prepaid GoSAKTO90 users can enjoy 1GB free GoWiFi access on top of 2GB mobile data, 2GB for GoWATCH&PLAY, 1 GCash voucher and unlimited all net texts valid for 7 days for only P90. On the other hand, TM EasySURF50 users automatically get 1GB free GoWiFi access, 1GB mobile data, 2GB for EasyWATCH&PLAY, 300MB for an app of their choice and unlimited allnet text all valid for 3 days.

Learn more about this story and other updates from GoWiFi via  https://www.globe.com.ph/gowifi.html.