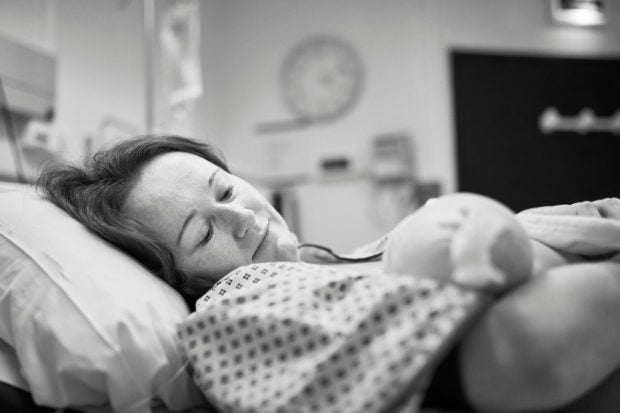 In a world first, a woman rendered infertile by cancer treatment gave birth after one of her immature eggs was matured, frozen, and then — five years later — thawed and fertilized, researchers in France reported.

A study in the journal Annals of Oncology published Wednesday describes how the baby boy was born to a 34-year-old French woman who had been treated with chemotherapy for breast cancer.

Before the treatment began, doctors removed seven immature eggs from her ovaries and used a technique called in vitro maturation (IVM) to allow the eggs to develop further in the laboratory.

Up to now, there have been no successful pregnancies in cancer patients with eggs that have undergone IVM and freezing.

Some children, however, have been born as a result of IVM immediately followed by fertilization and transfer to the patient.

“I offered her the option of egg freezing after IVM, and also freezing ovarian tissue,” he said in a statement.

“She rejected the second option, which was considered too invasive a couple of days after cancer diagnosis.”

So-called cryopreservation of ovarian tissue is an experimental method in which the outer layer of an ovary — which contains immature eggs — is taken out of the body and frozen for future use.

In the case of the French patient, ultrasound revealed that there were 17 small, fluid-filled sacs containing immature eggs in her ovaries.

But using hormones to stimulate the ovaries to ripen the eggs would have taken too long and might have made her cancer worse, leaving retrieval of the immature eggs and freezing as the best option.

After five years, the patient recovered from breast cancer, but she was unable to conceive naturally. The chemo had made her infertile.

Six of the eggs that had been frozen five years earlier survived the thawing process, and five were successfully fertilized.

One of these fertilized eggs was transferred to the patient’s womb, and she gave birth to a healthy baby boy — named Jules — on July 6, 2019.

“This success represents a breakthrough in the field of fertility preservation,” Grynberg said. RGA

No laboratory in PH is allowed to destroy excess embryos

TOPICS: Cancer, childbirth, Egg Freezing, in vitro maturation, motherhood
Read Next
Sweden creates $1 million prizes for sustainable food solutions
EDITORS' PICK
Current dominant strain of COVID-19 more infectious than original—study
Smart releases Hyun Bin’s second TVC
EuroMillions Superdraw: A lottery draw unlike any other is coming to the Philippines
‘Justice will be done,’ Duterte assures as he vowed probe on Jolo incident to bare ‘truth’
Water remains our saving grace right now
DOLE: Return of OFWs’ remains from Saudi to be ‘delayed,’ deadline moved to ‘early next week’
MOST READ
Locsin warns of ‘severest response’ if China’s army drills in SCS ‘spill over’ to PH domain
BREAKING: Duterte signs anti-terror bill into law
Duterte tells military: No other president looked at you the way I did
Vico: Cleanup of bidding process saved Pasig gov’t P415M
Don't miss out on the latest news and information.