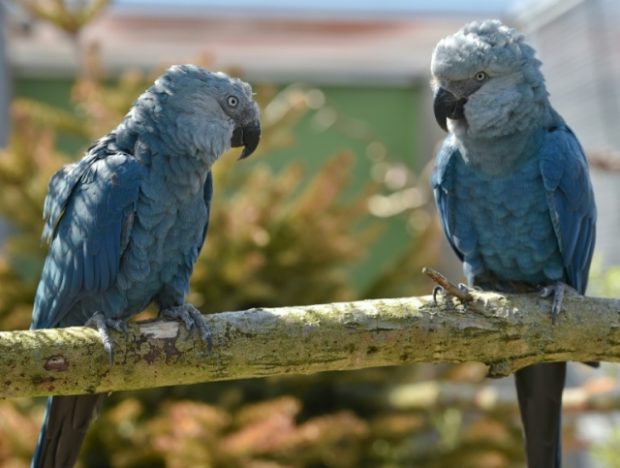 In what could be the next sequel to the hit film series “Rio”, a group of near-extinct Spix’s macaws arrived in Brazil Tuesday in a bid to return them to their natural habitat.

The bright blue parrots, which are extinct in the wild, shot to fame in 2011 with the animated film, featuring a Spix’s macaw that is raised in captivity in Minnesota and returns to Brazil to try to save his species.

In the real-life version, conservationists on both sides of the Atlantic collaborated to send 50 Spix’s macaws from Germany to Brazil, where the goal is to reintroduce them to the wild.

The macaws arrived by plane in the northeastern state of Pernambuco, said Brazilian environmental agency ICMBio.

It tweeted a picture of Environment Minister Ricardo Salles holding a cage carrying one of the birds, with the message: “They’ve arrived!”

The macaws will now be taken to a specially built facility in the city of Curaca, in neighboring Bahia state, said ICMBio, which is working on the project with a German conservation group, the Association for the Conservation of Threatened Parrots (ACTP).

“They will be prepared over the next few months for their resettlement and further life,” ACTP said on its website.

That includes 21 days of quarantine, followed by activities designed to help the birds adapt to the climate and survive in the wild, officials said.

Starting in 2021, a first group of them will be released into the wild. The rest will remain at the facility to breed.

The Spix’s macaw was declared extinct in the wild in 2000, the victim of poaching, habitat destruction and trafficking in exotic pets. Just 163 of them remain alive in captivity worldwide, according to ICMBio.

“Rio,” which featured the voices of actors Jesse Eisenberg, Anne Hathaway and Jamie Foxx, told the story of Blu, a Spix’s macaw raised in the snowy climate of Minnesota who gets swept up in a series of adventures and misadventures when his owner takes him to Rio de Janeiro to breed with the last known female of his species.

It was followed by a sequel in 2014. Together, the films have grossed nearly $1 billion. NVG