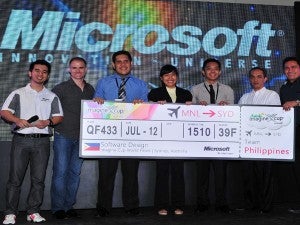 MANILA, Philippines—A team of Filipino developers will represent the Philippines in an international technology competition with software that aims to help autistic students learn better.

The team named Divided By Zero won in the Software Design Category of Microsoft Philippines’ Imagine Cup 2012 local finals held last March 23 with their “KidCAMP” web and mobile application. They will represent the Philippines in the upcoming Imagine Cup 2012 World Finals that will be held in Sydney, Australia in July.

Jason Josol, a member of the team said that “we are very happy and challenged to know that we will be representing the country in the Imagine Cup World Finals.”

“Our project KidCAMP will truly help the families of Autism Spectrum Disorder children [to] receive the same kind of learning experience as other kids do. Microsoft has helped us achieve and address this problem through this competition and we will do our best in July,” Josol said.

Josol said their team, composed of students from De La Salle – College of St. Benilde, found their inspiration for the software through his cousin who was an ASD patient.

His cousin was able to improve through the technology. “We realized that the educational software being made available to these students were quite limited and expensive, which is why we started to think of a way to give equal educational opportunities for all,” Josol said.

“With this program, educators and families will be able to tailor fit their programs according to the needs of these children,” he said

“We want to encourage more students to join and showcase Filipino ingenuity and innovation at the global arena, and grab the opportunity not only to compete against the best student developers and programmers around the world, but also to prove that tomorrow’s leaders are equipped with the passion and talent to solve the world’s problems,” de Dios said.

“The Imagine Cup is the world’s premiere student technology competition that gathers the best developers around the world and harnesses the creative minds of the youth to address problems faced by the world today using the power of information technology,” Microsoft said in a statement.

The competition has a theme every year and this year’s theme was “Imagine a world where technology helps solve the toughest problems.” All entries in the competition aimed to achieve one of the United Nation’s Millennium Development Goals on health, environment, education, and accessibility.

“Through the Imagine Cup, Microsoft heightens the awareness of the youth on the current issues and problems faced in society today and how they can be part of solving these concerns with the integration and use of technology,” Microsoft said.

John Bessey, Microsoft Philippines Managing Director, said in an interview that the Philippines have “always been very successful as a country in that competition.”

In 2010, the Philippines, represented by “Team By Implication”, won the Gold Medal in the Game Design Category of the Imagine Cup World Finals held in Poland.

Another Philippine team, “Signum Fidei”, won the Silver Medal in the Web Game Design Category in the Imagine Cup 2011 World Finals held in the United States.

De Dios said that the Philippines has consistently “been placing on the top of the world finals” in the past two years.

The Imagine Cup has had over 1.4 million student participants since it began in 2003. Last year’s Imagine Cup 2011 saw 358,000 students from 183 countries and regions competing against each other in several categories.

The winners of the competition will receive a cash grant and support and services in their respective projects.