It’s cloudy with a chance of iron rain at hot, faraway world 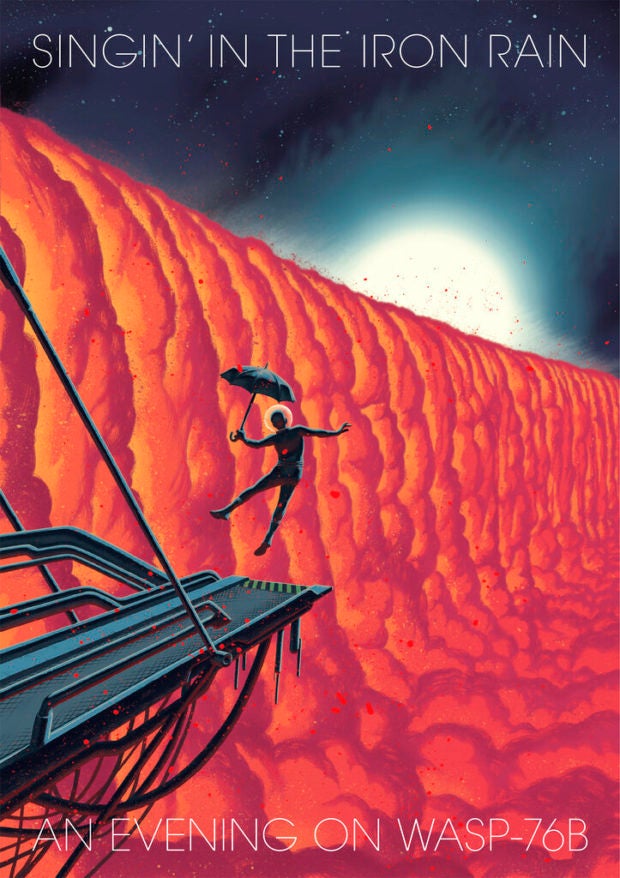 This image made available by the European Southern Observatory in March 2020 shows an illustration by graphic novelist Frederik Peeters titled “Singin’ in the Iron Rain – An Evening on WASP-76b.” On the hot, faraway planet, it’s always cloudy with a chance of iron rain. That’s the otherworldly forecast Wednesday, March 11, 2020 from Swiss and other European astronomers who have detected clouds full of iron droplets at a hot Jupiter-like world 390 light years away. (Frederik Peeters/ESO via AP)

That’s the otherworldly forecast from Swiss and other European astronomers who have detected clouds full of iron droplets at a hot Jupiterlike planet 390 light-years away.

This mega planet is so hot on the sunny side — 4,350 degrees Fahrenheit (2,400 degrees Celsius) — that iron vaporizes in the atmosphere. The iron likely condenses on the cooler night side of the planet, almost certainly turning into rain.

“Like droplets of metal falling from the sky,” said Christophe Lovis of the University of Geneva who took part in the study.

The iron rain would be extremely dense and pack a pretty good punch, according to the research team whose study appears Wednesday in the journal Nature.

“It’s like in the heavy steel industry on Earth where they melt iron, and so you see this melting, flowing metal. That’s pretty much what we are talking about here,” Lovis told The Associated Press.

Discovered just a few years ago, the planet designated Wasp-76b is nearly twice the size of Jupiter, the largest in our solar system, yet takes less than two days to orbit its star. Because the planet’s rotation matches the time it takes to complete one orbit, the same side always faces the star.

So it’s always daytime on the star-facing side, with clear skies. And it’s always nighttime on the night side, where temperatures fall to about 2,700 degrees Fahrenheit (1,500 degrees Celsius) and the sky is continually overcast with iron rain, according to the researchers.

Strong wind — gusting at more than 11,000 mph (18,000 kph) — constantly sweeps some of the vaporized iron from the day to night side of the planet. Inside the day-to-night transition zone, clouds appear to form as temperatures begin to drop.

“Surprisingly, however, we do not see the iron vapor in the morning” as night transitions back into day, lead scientist David Ehrenreich of the University of Geneva said in a statement.

The astronomers concluded the most likely explanation is that it rains iron on the night side.

Ehrenreich and his team studied Wasp-76b and its extreme climate using a new instrument on the European Southern Observatory’s Very Large Telescope in Chile.

While vaporized iron previously has been detected at an even hotter, more distant Jupiterlike world, it’s believed to remain in a gaseous state around that entire planet, Lovis said. At Wasp-76b, this is the first time iron condensation has been seen, he said.

There’s no telling whether it’s a steady drizzle or downpour, or what else might be raining down besides iron. But you’d need a sturdy umbrella — preferably made of a metal that melts at much higher temperatures, Lovis said.

In a fun poster designed by Swiss graphic novelist Frederik Peeters for the research team, a dancing astronaut holds up an umbrella in front of an orange waterfall-like deluge.