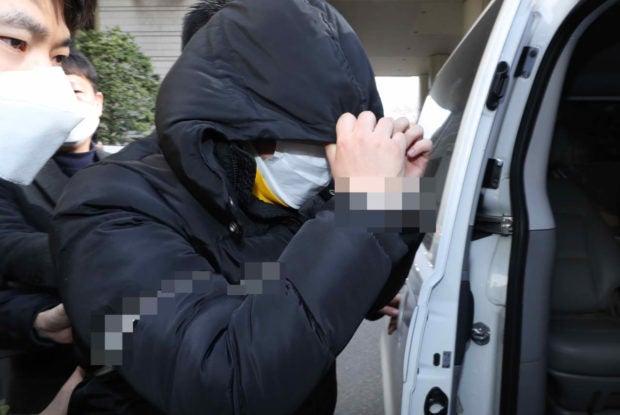 Suspect Cho hides his face as he leaves the Seoul Central District Court on Thursday. Yonhap via The Korea Herald/Asia News Network

SEOUL — A petition filed with the presidential office calling for the disclosure of 260,000 users of Telegram chat rooms used to share videos of sexual exploitation of minors has gained over 1 million signatures, according to the presidential website Sunday.

The petition urges authorities to make public the full identities of the clients of sexual content created and distributed by a ring allegedly run by an arrested man surnamed Cho.

“There is no doubt this crime against minors is appalling and repulsive, and should never recur. But this crime will recur in South Korea, if 260,000 customers face no penalties. There is no use in punishing the operators and suppliers only, not that they will be properly punished,” the petition reads.

“Users who were in the Telegram chatroom are all sex offenders. … I must know. Please reveal the full identity of all the users so that if the state will not protect children from child sex offenders we can do so ourselves.”

The petition was filed Friday, the day of Cho’s arrest, and 1.05 million people were in support of it as of Sunday morning.

Cho, a man in his 20s known by his Telegram nickname “Doctor,” was arrested Friday for allegedly victimizing at least 74 people, including 16 minors, police said. He is accused of sexual exploitation and assault on top of sharing content on Telegram since December 2018.

Whether Cho’s identity will be revealed is to be decided in the coming week by a committee of three officials within the police agency and four outside the agency.

According to police, Cho tricked victims into sending him nude photos that included their face, saying it was part of a high-paying part-time job.

Cho then used the nude pictures to blackmail victims, whom he referred to as “slaves,” to obtain videos of a sexual nature, and distributed them across Telegram chat rooms.

Police confiscated some 130 million won in cash at Cho’s home and are tracking proceeds of crime.

Thirteen of Cho’s alleged accomplices have been apprehended, of which four have been arrested and referred to the prosecution while nine are under police investigation, according to police.

TOPICS: Chat Apps, sexual exploitation, South Korea, technology, Telegram
Read Next
Fighting the virus of fake news in the time of coronavirus
EDITORS' PICK
Smart releases Hyun Bin’s second TVC
EuroMillions Superdraw: A lottery draw unlike any other is coming to the Philippines
DOLE: Return of OFWs’ remains from Saudi to be ‘delayed,’ deadline moved to ‘early next week’
Water remains our saving grace right now
‘Justice will be done,’ Duterte assures as he vowed probe on Jolo incident to bare ‘truth’
Current dominant strain of COVID-19 more infectious than original—study
MOST READ
Locsin warns of ‘severest response’ if China’s army drills in SCS ‘spill over’ to PH domain
Duterte tells military: No other president looked at you the way I did
BREAKING: Duterte signs anti-terror bill into law
‘Very timely, historic’: Senators laud passage of anti-terror bill despite ‘pressures’
Don't miss out on the latest news and information.