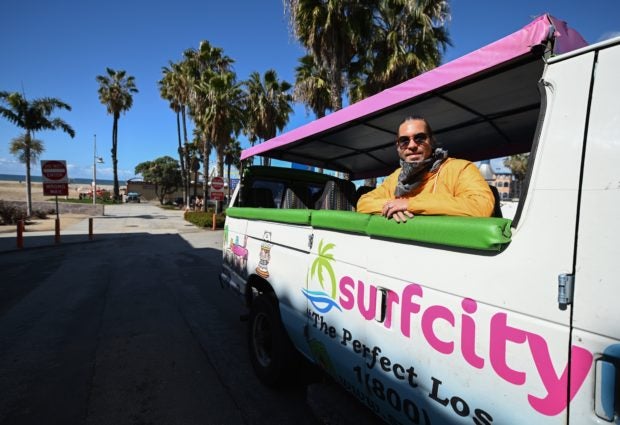 Adam Duford, owner of Surf City Tours, poses for a photo in one of his tour buses on an empty street near the beach in Santa Monica, California as the coronavirus pandemic forced his normal tour bus business to a halt, March 23, 2020. In an attempt to keep his business alive Duford has started giving online “virtual tours” . Photo by Robyn Beck / AFP

SANTA MONICA — “Here is the ocean, everybody!” announced Adam Duford, as his guided tour of Santa Monica arrived at the world-famous beach.

But Duford was standing all alone on the California coast, with no tourists to be found, and making no money.

The image of the Pacific ocean was being broadcast live on social networks via his smartphone, with the crashing waves appearing pixelated and interrupted by bad signal.

The spread of the novel coronavirus has grounded flights and prompted a statewide “stay-at-home” order — bids to prevent the disease’s spread that have crippled tourism.

So Duford has been forced to park his open-top buses, and try a new approach to reach those locked in their homes.

“Without people, there is absolutely no revenue to come in, so basically my strategy is just going into hibernation and being creative and productive… try to think positive,” the owner of Surf City Tours told AFP.

“I hope everybody is safe and social distancing,” he said at the start of his virtual tour, which he plans to run every other day.

With a phone in one hand and notebook in the other, Duford began his tour on a pleasant spring day at “Chez Jay,” the historic eatery where Marilyn Monroe and President John F. Kennedy used to meet.

He narrated the city’s development from the arrival of the Spanish through the construction of the pier which is visited by millions of people each year — but is now closed due to the pandemic.

California, the nation’s most populous state and the world’s fifth-largest economy, has suffered more than 2,200 confirmed coronavirus cases, including at least 42 deaths.

This week, the beach is empty. It is a far cry from scenes at the weekend, when tens of thousands of Californians ignored Governor Gavin Newsom’s order to stay at home.

On Monday, Newsom ordered the closure of all parking lots at beaches and parks — a “soft closure” to dissuade further visitors.

It is another blow to the state’s tourism sector, which injected more than $145 billion into the economy last year, according to Visit California.

The tourism non-profit was forecasting a 3.9 per cent growth this year before the virus struck.

Instead, the Hollywood Walk of Fame lies deserted, with the final attempts to round up passengers for tours of the stars’ homes and hangouts abandoned last week.

“On a week like this, spring break is kicking into high gear, we would expect to have thousands of guests,” said Duford.

He bought the company a year ago, and has seven vehicles which he expected to roll out by now. The two-hour tours start at $49, while the full five-and-a-half-hour experiences cost $85.

Instead, he has had to lay off seven employees.

With no end to the lockdown in sight, Duford intends to continue with his virtual tours. The same tactic has been adopted by others, from the Pacific Aquarium at Long Beach, with live animal webcams and talks, to the Getty Center and LACMA museums, which run virtual tours.

“I really hope that this brings a lot of joy to people that are stuck at home,” said Duford.

“Obviously nothing will be equivalent to the real thing, but it’s just something I can do… for 30 minutes, escape from whatever real life is right now.”