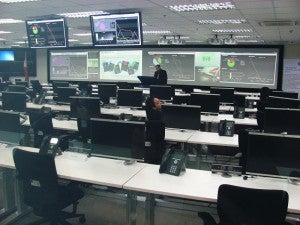 HP’s state of the art Mission Control Center as seen from an adjacent boardroom. The 42-foot wall display shows a multitude of data using HP’s own “Photon Engine” software that “stitches” together the displays of several projectors. Everything is controlled through the touch screen control panel seen at the center. Matikas Santos/INQUIRER.net

MANILA, Philippines— You’ve seen it in the movies, somebody in front of a large transparent, paper-thin screen viewing and moving data and information from one screen to the next by gesturing with his hands at the screen.

This is the real-life version of it.

Several projectors displaying a multitude of data, graphs, tables, videos, photos, others on a wide screen on a wall at least 40 feet in length. All information being displayed is in the control of a person operating from a touch screen control panel. With a simple tap of the controller’s smart phone at the bottom portion of the display, the entire display can be controlled on a touch-screen phone.

President Benigno Aquino III, who toured the site during its inauguration on March 29, was very impressed by the technologies being used and expressed interest in using it for disaster relief operations.

State Of The Art

Among the advanced technologies being showcased at HP’s facility are its advanced video conferencing rooms.

Emmanuel Mendoza, Director of HP’s Global Delivery Application Services Philippines and South Pacific, toured reporters to the “Halo Room”, a small room with three monitors and cameras, and a conference table that allows real-time video conferencing with up to four HP sites in the world.

“We can do meetings face-to-face instead of having to travel all the way to those different locations,” Medoza said. It gives them better communication channels which translate to better coordination and collaboration between HP’s global sites, he added.

Another of HP’s showcased technologies was the “War Room,” a small room with a wall display around 20 feet long that uses several projectors to show a large amount of information.

Peegee Latonio, who presented the “War Room”, demonstrated how the screen can be used to monitor the entire traffic system of a city. He said that it can simultaneously display the traffic situations through live video feeds, monitor traffic violation tickets issued, see the location of all police cars, monitor traffic accidents, etc.

Important information up on the display of the War Room could even be transferred to the main screen in the Mission Control Center, Latonio said.

“The key here is to be able to get the right data to the right people at the right time,” Latonio said. Soon, they could also be able to transfer the display across countries, he said.

With a flick of a finger on the touch-screen control panel, he changed all the information into financial data such as stocks, statistics, charts, etc. This technology has a wide-range of applications in many industries, he said.

The Mission Control Center itself is a very large room that has rows and rows of computers with the centerpiece 42-foot wall display on one end. It closely resembles the United States’ National Aeronautics and Space Administration (NASA) control center.

The several projectors that display information on the screen is powered by HP’s “Photon Engine” software which allows the projector displays to be “stitched” together to show one big continuous screen.

The main display is primarily controlled by a touch-screen control panel on the floor or through a system-authorized touch-screen smart phone.

The information that can be shown simultaneously on the screen can be sourced from any location throughout the entire world.

HP executives called the facility a “Global Delivery Access Center,” and said there are only six of these in the world. The Philippines was lucky enough to be one of the places chosen by HP.

“We are focused on countries that we believe have a lot of potential from an IT sector growth point of view and the Philippines is exactly one of those countries,” Brian Humphries, HP’s Growth Markets Organization Senior Vice President, told journalists during a tour of the facility.

Not only was the Philippines chosen as one of the six countries in the world to have this facility, but it is also the first to go live using HP’s high-tech software.

“We think the potential, both in terms of the consumer, small and medium sized businesses, as well as the enterprise businesses, is significant and that’s why the Philippine business is one of our priority road markets countries,” Humphries said.

Humphries said that HP’s plan for the Philippines is based on a “three to five year view or business plan in terms of what we can do locally to grow the operations.”

He said that there are two things that they see in the Philippines which they believe will help HP become successful in their business plan.

The first was “a very strong, educated, talented workforce,” thanks to the strong educational system in the country, Humphries said.

The second was “the size of the commercial opportunity locally for HP, the more success we have in the market, the more people buy our products and services, the more people we will hire, and therefore grow,” he added.

“So we do actually have a great deal of confidence around the ICT sector of the Philippines and that’s why it’s one of our priority countries,” Humphries said.

Ryan Guadalquiver, managing director of HP Philippines, said that they are looking to work for the government.

“The one area that we want to really participate in, in terms of industries where HP has not been very active the past few years, is public sector,” he said.

He said that President Aquino had asked if the technology could possibly be applied in disaster relief operations where there is a need to coordinate with many locations and to analyze vast amounts of data and information.

Currently, there is not specific government project that HP has in mind but President Aquino had “expressed his interest and satisfaction and the potential of [the technology] for him and his government, which is a very good sign,” Humphries said.

Using high-tech software, HP’s Mission Control Center has the entire world, quite literally, at their fingertips.