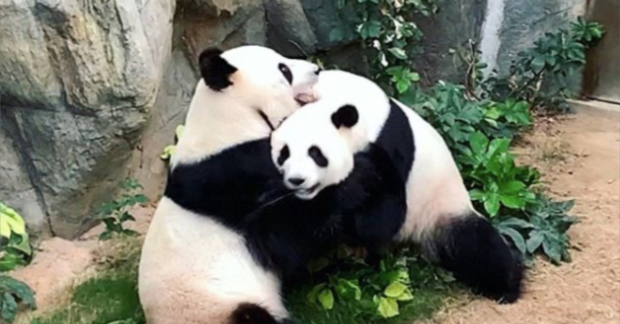 The female and male pandas, named Ying Ying and Le Le, mated yesterday, April 6, the center said in a statement on the same day.

“Since late March, Ying Ying began spending more time playing in the water, while Le Le has been leaving scent-markings around his habitat and searching the area for Ying Ying’s scent,” the park explained. “Such [behaviors] are consistent with those common during breeding season, which occurs once every year between March to May.”

Along with the changes in the female’s hormonal levels, the center’s animal care teams confirmed that the pandas have entered this year’s breeding season.

“The teams have been closely monitoring the giant pandas’ body conditions and [behavioral] changes and deemed it a peak oestrous this morning for natural mating opportunity,” it added.

He also pointed out that while the two pandas arrived in the center in 2007, they only began attempts at natural mating in 2010. The success of their coupling also means there is a higher chance of Ying Ying getting pregnant compared to artificial insemination.

“If successful, signs of pregnancy, including hormonal level fluctuations and [behavioral] changes may be observed as early as late June, though there is always a chance that Ying Ying could experience a pseudo-pregnancy,” Boos said.

The park will continuously monitor the female’s hormonal levels and behavioral changes.

The gestation period for giant pandas ranges between 72 and 324 days. Meanwhile, pregnancy confirmation can only be detected with an ultrasound scan earliest 14 to 17 days before birth. JB

Woman houses 97 dogs to save them from Hurricane Dorian