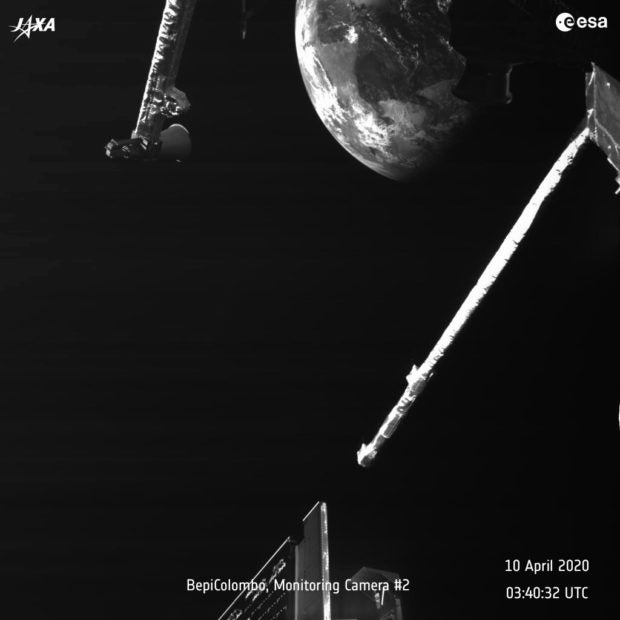 The earth as seen by the BepiColombo spacecraft on April 10, 2020 (Image: ESA/JAXA via AP)

Launched 1 1/2 years ago, Europe and Japan’s BepiColombo spacecraft passed within 8,000 miles (12,700 kilometers) of Earth. The closest approach occurred over the South Atlantic, with telescopes in Chile catching a glimpse of the speeding spacecraft.

The gravity tug from Earth slowed BepiColombo and put it on a course closer to the sun.

It was the first of nine planetary gravity assists—and the only one involving Earth—on the spacecraft’s seven-year journey to Mercury. The spacecraft—comprising two scientific orbiters—should reach Mercury in 2025, after swinging twice past Venus and six times past Mercury itself. The next flyby will be at Venus in October.

“These selfies from space are humbling, showing our planet, the common home that we share, in one of the most troubling and uncertain periods many of us have gone through,” Gunther Hasinger, the European Space Agency’s science director, said via Twitter.

The space agency’s control center in Germany had fewer staff than usual for Friday’s operation because of the coronavirus pandemic. The ground controllers sat far apart as they monitored the flyby. Data from the flyby will be used to calibrate the spacecraft’s science instruments.

Scientists hope to learn more about the origin and composition of Mercury, once the European and Japanese orbiters separate and begin their own circling of the scorched planet.

Mercury is the least explored of our solar system’s four rocky planets. It’s just a little bigger than our moon and circles the sun in just 88 days.

The spacecraft is named after Italian mathematician and engineer Giuseppe “Bepi” Colombo, who devised the use of planetary flybys for Mercury encounters. He died in 1984. CL /ra

‘Black in Space’ looks at final frontier of civil rights