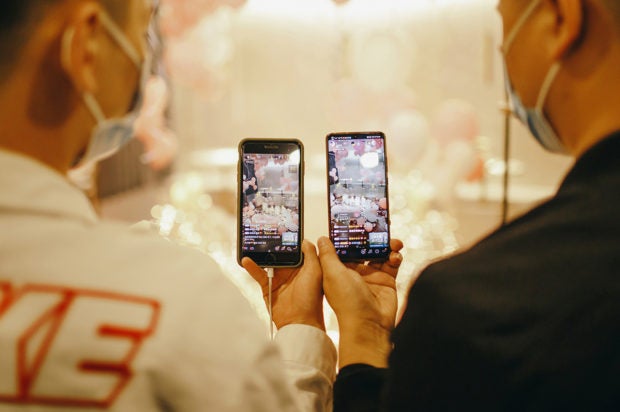 BEIJING — Zhang Xiaojing is a 33-year-old accountant for a foreign trade company in Beijing who has been spending time scrolling through her dating apps since the novel coronavirus outbreak.

Bottom line, Zhang is looking to find a boyfriend and get married as soon as possible.

“I used to participate in some offline dating activities during the weekends, but almost all gatherings have been prohibited. Cinemas and bars were shut down to curb the spread of the deadly virus. I have to remain indoors to avoid getting infected.”

Zhang lives alone and feels very bored so she downloaded several online dating apps. They included Momo and Tantan in a bid to make new friends, and to give her some relief from the stress and loneliness.

She noted that Tantan’s way of finding dates, unlike traditional dating websites, is more interesting and simple.

“You just browse the profiles recommended to you based on your location, distance and gender preferences. Swipe right if you like someone, and swipe left to show you are not interested.”

“I chat only with the people that I am matched with, and can also choose to hide my contacts. The app adds other functionalities which people can use for free. For instance, I can play games, upload pictures or texts and share videos on it.”

For Zhang, online romance in the time of the contagion has become more than just finding love. It is also a source of comfort and connection.

Online dating apps have seen a significant increase in usage due to the COVID-19 outbreak.

Industry experts said the “cloud matchmaking” method, which includes livestreaming and short videos formats which comply with the habits of users and satisfy the needs of self-presentation, is gaining tractions among singles.

A report released by mobile dating app Tantan said the average time people spent on the app in early and mid February increased over 30 percent compared with the average usage during normal times. The number of users surged 60 percent during the peak hour which often runs from midnight to 1 am.

During the outbreak, those born after the period around 1995 and after 2000 have become the top users of Tantan. They recorded a more than 20 percent increase in messages sent and daily matches. Another notable fact is that the number of older users who came back rose by 25.9 percent compared with the level during normal times.

Founded in 2014, Tantan focuses on one-on-one interactions and targets students and white-collar workers. Women accounted for nearly half of the total users. So far, it has 10.5 million daily active users and 35 million monthly active users.

Data from iResearch Consulting Group showed the revenue of China’s online dating and matchmaking industry will increase from 4 billion yuan ($567 million) in 2017 to 5.3 billion yuan in 2020.

For singles, the pressure to get married usually increases when they return home during the Spring Festival holiday for family reunions. Their parents, grandparents and other relatives badger them about their personal lives to nosily inquire why they have not gotten married.

“Generally speaking, the emotional demand of singles reaches a peak on Valentine’s Day and lasts until the end of February,” Wu said.

Statistics from the company showed the time users spend on video dating rose 29.8 percent during the Spring Festival holiday, compared with the data from the festive season last year. The average usage time skyrocketed 93 percent versus the time from the same period a year ago.

Surfing the internet has become a major way to help ease their anxiety, with 30 percent of singles keen about making friends online. About 30 percent of men and 41 percent of women have switched from attending offline activities to online dating.

“The epidemic has given a big boost to the online dating apps, which are usually in the off season in the first quarter and gradually gain popularity after the Spring Festival,” said Yang Xin, an analyst with Beijing-based internet consultancy Analysys.

Yang believes that with rapidly increasing traffic, mobile app companies should think of how to hang onto their customers when the pandemic ends.