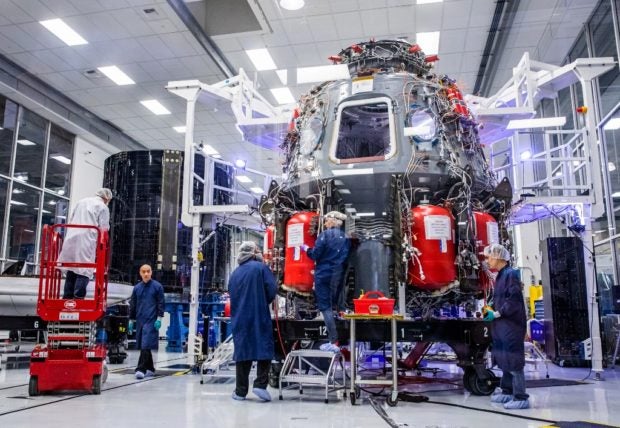 (FILES) In this file photo taken on October 10, 2019, employees of SpaceX work on the Crew Dragon reusable spacecraft after a press conference at SpaceX headquarters in Hawthorne, California. – A SpaceX rocket will send astronauts Robert Behnken and Douglas Hurley on a SpaceX Falcon 9 rockets to the International Space Station on May 27, 2020, NASA announced on May 1, the first crewed spaceflight from the US in nearly a decade. (Photo by Philip Pacheco / AFP)

NASA and SpaceX said Friday they were pressing ahead with plans to launch astronauts to space from US soil for the first time in nearly a decade later on this month, despite the coronavirus pandemic.

Robert Behnken and Douglas Hurley, both veterans of the Space Shuttle program that was shuttered in 2011, will blast off from the Kennedy Space Center in Cape Canaveral, Florida on May 27.

Should the mission succeed, the US will have achieved its goal of no longer having to buy seats on Russian Soyuz rockets to give its astronauts rides to the International Space Station (ISS).

It is also an important stage in NASA’s new economic model: the space agency has spent billions on contracts with both SpaceX and Boeing to develop spaceships that will each have to make six round trips to the ISS.

The model is supposed to save taxpayers from financial black holes of past programs, as well as some still to come — notably the giant Space Launch System rocket that is supposed to take NASA back to the Moon but is plagued by cost overrun and scheduling delays.

NASA administrator Jim Bridenstine told reporters that the SpaceX Crew Dragon capsule will be only the fifth class of US spacecraft to take humans into orbit, after the storied Mercury, Gemini, Apollo and Space Shuttle programs.

“If you look globally, this will be the ninth time in history when we put humans on a brand new spacecraft,” said Bridenstine.

“We’re going to do it here in the midst of the coronavirus pandemic. I’m going to tell you this is a high priority mission for the United States of America,” he added.

Behnken and Hurley, who have been training for the “Demo-2” mission for years, will dock with the International Space Station (ISS) and remain there for between one to four months, depending on when the next mission takes place, said NASA’s Steve Stich.

Crew Dragon is able to remain in orbit for around four months (119 days).

Hurley, who was the pilot on the last Space Shuttle mission, admitted it was “disappointing” that the launch won’t be a public affair, with crowds discouraged from gathering at Cape Canaveral to witness the spectacle.

“We won’t have the luxury of our family and friends being there at Kennedy to watch the launch but it’s obviously, the right thing to do in the current environment,” he said.

The mission is a major milestone for SpaceX, the company founded by Elon Musk, who also leads and founded Tesla.

His firm, which was started in 2002, has now overtaken aerospace behemoth Boeing, which failed in the uncrewed demonstration mission of its Starliner spacecraft last year and will have to start over.

SpaceX, which has received billions of dollars from NASA since the late 2000s, has been supplying cargo to the ISS since 2012, and has established itself as the leader in the private space sector thanks to its reusable rocket, the Falcon 9.

The pandemic has, naturally, impacted the program, but Shotwell said all precautions were being taken to protect the astronauts.

“We are ensuring that only essential personnel are near them. They’re wearing masks and gloves. We’re cleaning the training facility twice daily.

“I think we’re really doing a great job to ensure that we are not impacting the safety or the health of the astronauts’ lives.”

Half of SpaceX’s engineers have been teleworking, and on the day of the launch, NASA personnel in the mission control room will be spaced six feet (two meters) apart.