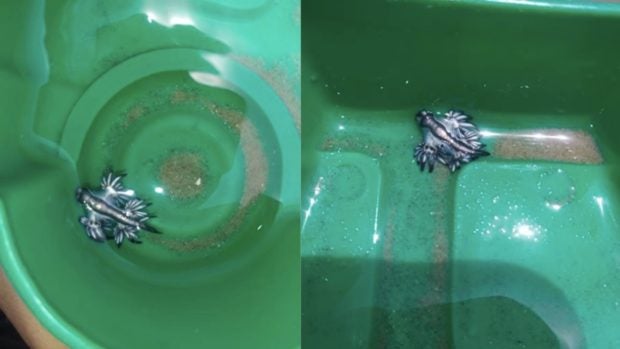 A rare type of sea creature, commonly referred to as a blue dragon, was spotted by some tourists washed up on the shore of Padre Island National Seashore (PINS) in Texas, United States.

The blue glaucus or blue dragon is a type of nudibranch (sea slug) which only grows up to 3 centimeters, as per PINS National Park Service’s Facebook page last Thursday, May 7. Despite its size, the page advised curious tourists to stay away from the sea creature.

According to PINS, blue dragons are a “predator of the Portuguese man-of-war,” a venomous siphonophore often mistaken for a jellyfish.

“So, if you see a dragon in the park, be amazed as they are a rare find, but also keep your distance!” it added.

Here there be dragons!A blue dragon, a type of nudibranch or sea slug, was found in the park this weekend. Blue…

Posted by Padre Island National Seashore on Wednesday, May 6, 2020

The photos which the local park used were captured by 7-year-old Hunter Lane, who apparently found the blue dragon on the beach on May 3.

The Lane family spotted several blue dragons during their beach trip in PINS last week. They apparently took some photos of the creature but they eventually released the creatures back in the ocean, ABC-affiliate KSAT-TV reported last Friday, May 8. Lane’s mother, Leah, also narrated how Hunter wanted to touch the sea creature but thought against it.

“Hunter really wanted to touch it, I don’t blame him, I did too, as they look very soft and squishy,” she was quoted as saying. “After thinking about it he (Hunter) even said ‘he might be like the poison dart frog mom, he is kind of brightly colored, which is a warning.’ Smart kid.”

The mom added that she and her husband have spent years camping and visiting the area, but neither them had seen the sea creatures until now.

Since PINS posted about Hunter’s find, other citizens have been reporting that they also spotted the sea creature on the beach.

“A lot of people are finding them lately,” a spokesperson of PINS said in the report. “That will often happen with animals that a bunch will wash up at the same time.”

Amid the COVID-19 pandemic, an American lawyer, Daniel Uhlfelder, recently dressed up as the Grim Reaper, to remind the public of the dangerous effects of not following social distancing guidelines at “prematurely” opened beaches in the U.S. Cha Lino/JB