In age of untact, virtual world of Minecraft rises as alternative to physical world 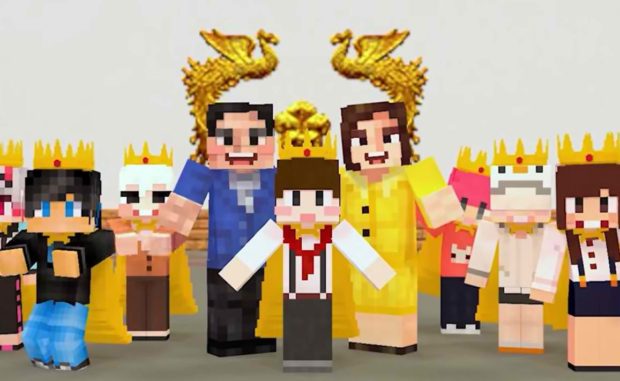 (Note: Newly coined term untact refers to non-face-to-face contact and has been widely used in South Korea amid social distancing.)

SEOUL — As the COVID-19 pandemic continues to cause the postponement and cancellation of event after event, creating online replicas of the world using Minecraft to host events in the virtual world has become increasingly popular.

In Minecraft, one of the most popular video games of all time, players explore a world made of unit-sized blocks and alter the environment to their choosing. In creative mode, players can build anything they want with limitless possibilities offered by the unit-sized blocks.

Since its early days — Minecraft was officially launched in November 2011 — many gamers have taken to making replicas of famous buildings around the world such as the Taj Mahal and Eiffel Tower. As the game allows a multiplayer mode, players can also work together on projects or invite others to enjoy their work.

Many institutions saw the world of Minecraft as an opportunity to host events digitally — exploiting its flexibility and accessibility, it allows for anything to be built and anyone to enter the virtual world.

Cheong Wa Dae posted a video on YouTube inviting children to join President Moon Jae-in and first lady Kim Jung-sook on a tour of Cheong Wa Dae on May 4, a day ahead of the Children’s Day holiday. In the video, Moon and Jae-in and his wife narrated Minecraft characters representing them and showed children around the virtually made Cheong Wa Dae, including the president’s office.

“We’ve been looking forward to seeing you, but because of the COVID-19 outbreak we invited you here this year,” said Moon in the video.

“Here, we want you to remove masks, run around and have fun with your friends,” he continued.

Along with Cheong Wa Dae, schools, hospitals, police stations, fire stations and many other buildings were available in Minecraft for children to explore.

“I hope this video empowers you all who are staying home. I’m so proud of you for enduring the situation,” said Moon and his wife in actual footage after the virtual reality tour.

The University of Pennsylvania also hosted Penn Relays, the oldest and largest track event in the US, digitally, in conjunction with esports company GenG. Franklin Stadium, where the events are held, was replicated in Minecraft with relay courses featuring lava and a Marine Corps training course.

The event which was streamed on Twitch on April 24 for about five hours and had over 10,000 views.

“When coronavirus caused a cancellation in the event, we quickly shifted to rebuilding the activation digitally within Minecraft. This was a fun and unique way to showcase a physical event such as a 125-year-old track race like the Penn Relays and to bring it to the digital world on Twitch,” Jordan Sherman, head of revenue operations for GenG, told The Korea Herald.

Two Boston University seniors, Rudy Raveendran and Warren Partridge, created Quaranteen University, a virtual university in Minecraft. Any 2020 graduating student can join online in the ceremony scheduled for May 22. Raveendran got the idea from Japanese elementary school students who hosted an online graduation in Minecraft that went viral in March.

So far, 1,477 students from over 439 schools have signed up for the online event.