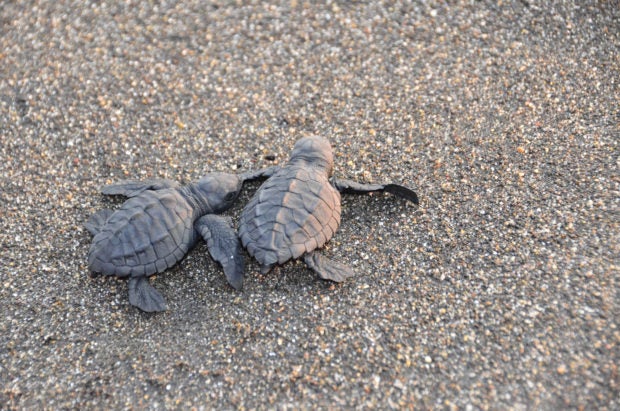 A seaside barangay in Magsaysay, Misamis Oriental has overseen the hatching of almost 300 turtle eggs on their shores amid the community quarantine.

Barangay Candiis, along with the rest of Misamis Oriental, was put under general community quarantine in March. While they observe measures against the spread of the coronavirus, the villagers have helped release 299 turtle hatchlings into the sea, Mongabay reported on Friday, May 15.

The village helped deliver 144 hawksbill sea turtle hatchlings on May 1, and 155 on May 12.

“Despite the limited work hours, we balance fishing and protecting our marine protected area here,” Rolando Pagara, a village council member, said in the report.

“That’s why we immediately noticed the turtle nesting sites on the beach … the turtles leave their trails or marks, which we were trained to spot in the morning; mother turtles usually lay their eggs in the evening the previous day or at early dawn,” he added.

Other residents were also excited over the turtles’ births. According to the report, it was the first time that no eggs were spoiled, citing that the community has seen hatchlings decline by 50% in recent years due to rising sea levels which has caused eggs on the beach to spoil.

Pagara, who has been heading the turtle conservation program for over a decade, also mentioned that the second batch of eggs had hatched earlier than he expected. He noted that the hot temperature in the past weeks may be a factor in their hatching.

“Usually, it takes a hawksbill turtle egg to hatch between 60 to 65 days after they are laid in the sand,” Pagara explained.

Following the latest batch of 155 turtles, the community is expecting a third batch of 100 eggs to hatch in the third week of May, as per the report.

The three batches make up the most number of hatchlings released into the sea in one month for the community in recent years.

Along with Candiis, other villages such as San Isidro and Damayohan also house nesting sites for the turtles. Magsaysay is home to a 612-hectare site that is declared a critical habitat for the animal.

The said species is one of the most trafficked turtles on the black market due to its shell, which is used to make ornaments. The International Union for Conservation of Nature (IUCN) has classified them as critically endangered. The report also noted that the animal’s population has declined by 80% in the last decade.

In line with the IUCN’s classification of the hawksbill turtle, hunting, killing and gathering of their eggs and destructions of their nests can be punishable under Republic Act No. 9147 or the Wildlife Resources Conservation and Protection Act. Those who kill and destroy wildlife species can face imprisonment for up to 12 years and/or a fine of up to P1 million. Ryan Arcadio/NVG