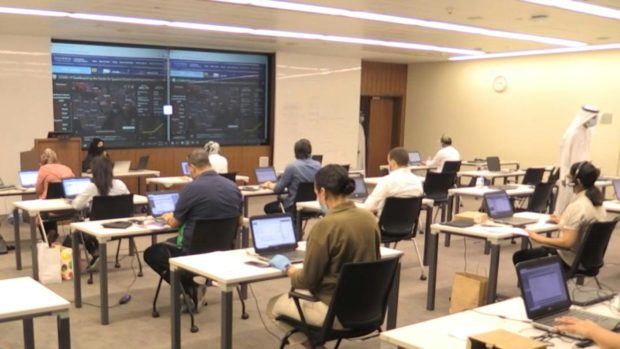 DUBAI — From smart police helmets to research labs, the novel coronavirus has given Dubai an opportunity to test its technological and scientific clout as it shapes its approach to the pandemic.

A key part of the glitzy Gulf emirate’s fight is its COVID-19 Command and Control Centre, set up to coordinate the efforts of Dubai’s doctors, epidemiologists and other professionals.

It is hosted within the Mohammed Bin Rashid University of Medicine and Health Sciences (MBRU) in Dubai’s Healthcare City, also home to state-of-the-art hospitals, labs and research centers.

“For several years, Dubai has endeavored to put in place solid digital infrastructure, and this has contributed to the fight against the coronavirus”, said Amer Sharif, who heads the multidisciplinary centre.

It was established at the start of the health crisis by Dubai Crown Prince and social media star Sheikh Hamdan bin Mohammed bin Rashid Al-Maktoum.

In one room, young mask-wearing men and women sit at carefully separated desks crunching data on laptops and coordinating with workers on the ground.

The initiative includes a scientific team whose role is “to stay abreast of the latest advances in research and scientific evidence, both in the country and elsewhere in the world”, team head Alawi Alsheikh-Ali told AFP.

The United Arab Emirates has carried out more than 1.6 million coronavirus tests, and has officially declared over 28,700 infections, including 244 deaths.

This high-tech approach, Sharif said, including “the complete digitization of the health system”, has prevented a greater spread of the virus and made the lockdown easier.

Tom Loney, associate professor of public health and epidemiology at MBRU, said the coronavirus was an opportunity for Dubai to put its capabilities to the test.

“It’s the ability to react, to make quick decisions based on data and science” that sets Dubai apart, said Loney, who is also an adviser to authorities in the city-state.

According to him decisions were made by order of Dubai ruler Sheikh Mohammed bin Rashid Al-Maktoum, whose portrait is featured on the MBRU building.

Dubai is one of seven emirates in the UAE, a key Gulf state with big technological and scientific ambitions.

The emirate lacks the oil wealth of its neighbors, but has the most diversified economy in the Gulf, building a reputation as a financial, commercial and tourism hub.

The UAE sent an astronaut into space last year, and in July is set to launch the first Arab probe towards Mars, a project sponsored by the emir of Dubai.

Many tech options were already at Dubai’s fingertips when the pandemic struck, and the emirate was quick at putting its technology to a variety of uses during the virus crisis.

When a night-time curfew begins, Dubai residents — 90 percent of whom are expats — receive a reminder message on their mobile phone in Arabic, English or other languages.

The UAE has regularly announced research advances into the COVID-19 illness, developing several apps to help manage the pandemic.

One of them, Alhosn, which the government has encouraged residents to download, helps track people who are infected with the virus or who may have come in close contact with confirmed cases.

But the use of technology to fight the pandemic has raised concern across the world over government surveillance and privacy risks.

Tech experts and the media have highlighted this issue in the UAE, where some foreign websites and applications are already blocked.

But Sharif pushed back against skepticism.

“Dubai and the Emirates respect privacy, whether it is a question of patient records or smart applications”, he said.

The emirate was creating its “own model” of responding to the health crisis, Sharif added, though authorities were also looking at countries such as South Korea, seen as a positive policy response to the crisis.

“We must follow the developments… but also add to them,” he said.