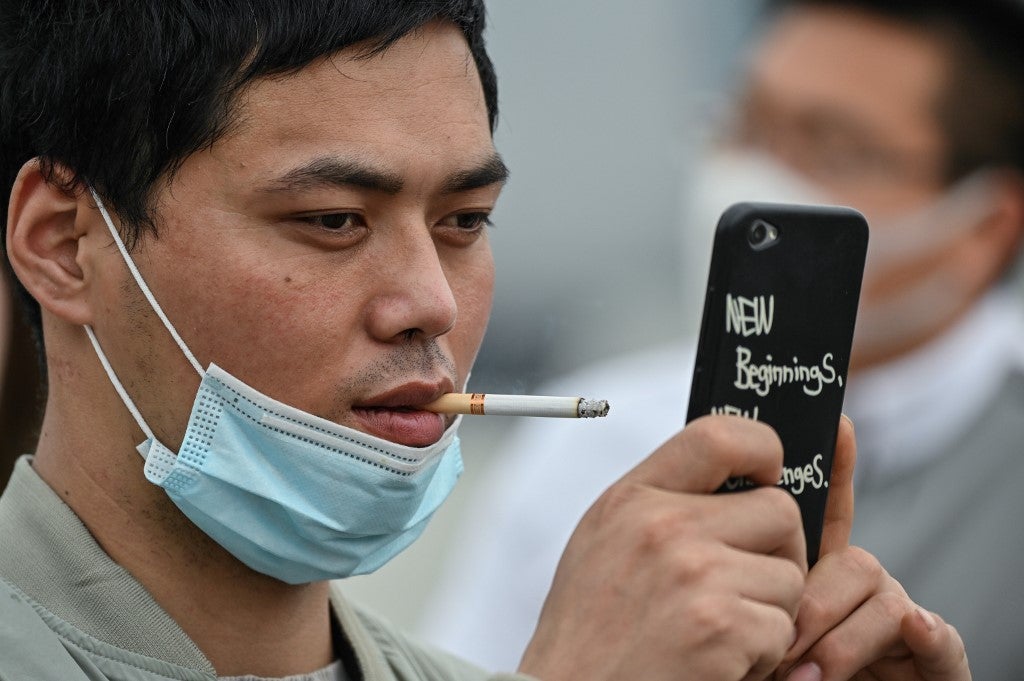 A man smoking a cigarette over a face mask takes a photo at the promenade on the Bund along the Huangpu River during a holiday on May Day, or International Workers’ Day, in Shanghai on May 1, 2020. (Photo by Hector RETAMAL / AFP)

A Chinese local government’s proposal for a post-coronavirus health app that ranks citizens based on their smoking, drinking, exercise and sleep habits has sparked fury online over privacy concerns.

China has already developed apps that indicate an individual’s likelihood of contracting coronavirus based on their travel history and whether they had come into contact with an infected case.

Hangzhou, a high-tech hub and home to e-commerce giant Alibaba, was among the first Chinese cities to adopt such an app, which gives people a green, yellow or red code that determines if they can buy travel tickets or enter public places.

But the health commission in the eastern city of 10 million people is now considering rolling out an app that looks much deeper into the health of citizens.

The software monitors users in real-time and ranks them on a 100-point “health gradient” scale, according to a post on the commission’s website.

According to shots of the app shared in the post, it ranks citizens out of the entire population of Hangzhou based on their health score, which changes according to the user’s daily actions.

For example, drinking a glass of white wine could set your score back by 1.5 points, while sleeping for seven hours could improve it by one point.

The app can also give companies and residential communities an overall health score based on the scores of individuals, such as employees’ average sleep rate, steps taken and how many of them suffer from chronic disease, according to a screenshot.

Currently in development, the app could be completed as early as June, but further details — such as how data is collected — remain unclear.

Big data-powered health apps developed by local governments in collaboration with internet firms Alibaba and Tencent have become part of the fabric of life in post-coronavirus China.

The apps, which differ by region and are often hosted on the ubiquitous mobile payment platforms AliPay and WeChat Pay, typically collect user location data, transport routes and ID information.

Chinese tech commentator and privacy advocate Lawrence Li said that the new app should ideally be an opt-in system to protect citizens’ rights.

“In the case of COVID (data collection) I think people willingly participated, but it’s another story if the government wants to make it the ‘new normal’,” he told AFP.

The proposal, which was posted online last week, stoked major discussions on the Twitter-like social network Weibo and question-and-answer forum Zhihu over the weekend.

“What the hell do my smoking, drinking and sleeping habits have to do with you?” read one comment on Weibo.

“We have no privacy left whatsoever,” lamented another user.

Last month, police in Shanxi province announced that the personal information of over 6,000 people who entered a local hospital had been leaked on WeChat.