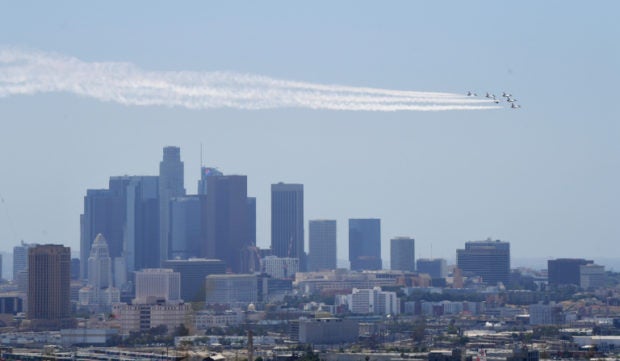 The US Air Force Thunderbirds fly over Los Angeles, California on May 15, 2020 as a salute to frontline COVID-19 workers and first responders. Image: AFP/Frederic J. Brown via AFP Relaxnews

The United States Air Force will be putting a human pilot up against an autonomous aircraft in air-to-air combat next July, Air Force Magazine reported last week.

Researchers for the US Air Force are developing an AI-powered autonomous aircraft that could potentially take down a human-manned aircraft; their goal is to put a human pilot up against this AI in air-to-air combat, which was a challenge inspired by statements made by Elon Musk earlier this year, in July 2021.

While the head of the Pentagon’s Joint Artificial Intelligence Center Lt. Gen. Jack Shanahan states that the research team is “probably going to have a hard time getting to that flight next year… when the machine beats the human… If he does it, great.”

This project was originally launched in 2018. The research team’s leader Steve Rogers says that “Our human pilots, the really good ones, have a couple thousand hours of experience. What happens if I can augment their ability with a system that can have literally millions of hours of training time?… How can I make myself a tactical autopilot so in an air-to-air fight, this system could help make decisions on a timeline that humans can’t even begin to think about?”

If the team accomplishes this, they intend to implement this type of technology in maintenance operations and battle planning software. JB