Amazon urged to break ties with police in petition 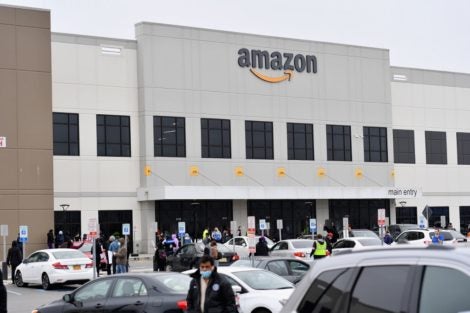 In this file photo taken on March 30, 2020 Amazon workers at Amazon’s Staten Island warehouse strike in demand that the facility be shut down and cleaned after one staffer tested positive for the coronavirus in New York. Image: Angela Weiss/AFP

A coalition of racial justice groups on Tuesday launched an online petition calling for Amazon to cut all ties with police and U.S. immigration officials.

The groups want Amazon to sever ties with police departments and U.S. Immigration and Customs Enforcement.

Amazon’s “surveillance empire” could be used by police to target people by race, making the company complicit in such abuse, Media Justice and other petition backers argued.

Amazon did not immediately return a request for comment.

“The inequitable and brutal treatment of black people in our country must stop,” Amazon said in a recent tweet in support of protests calling for the justice system to treat people of all races equally.

“Together we stand in solidarity with the black community — our employees, customers and partners — in the fight against systemic racism and injustice.”

It was not clear to what degree Rekognition is used by police or immigration agencies.

Ring cameras sold by Amazon are used for home security, but people can share access to surveillance video with police if they wish.

Amazon shareholders last year rejected proposals to prohibit sales of facial recognition technology to governments and study how it might threaten privacy or civil rights.

The failed proposals were put forth by a group of shareholders but opposed by the board of directors at Seattle-based Amazon.

IBM this week said it is no longer selling general purpose facial recognition software and is opposed to using such technology for racial profiling or mass surveillance.

The century-old technology firm called for responsible national standards regarding how facial recognition systems should be used by police agencies. NVG