Why is ‘Fortnite’ flooded? Chapter 2 season 3 may bring answers 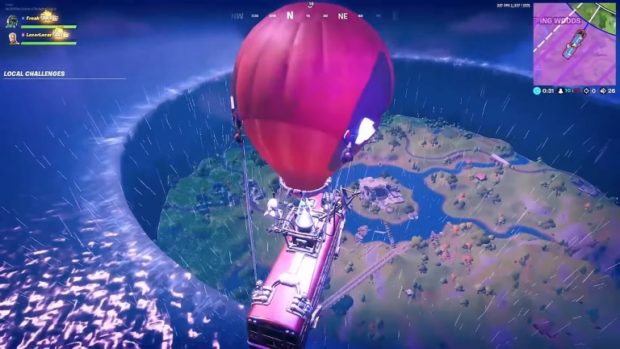 This sea wall is made out of liquid, not solid.

Overnight, the “Fortnite” island has been transformed from a verdant isle hemmed in by a gradually contracting storm to a shrinking landmass encircled on all sides by an unstoppable wall of water.

The map transformation is the result of a Monday, June 15 in-game event called The Device, watched by a live audience of 20 million; 12 million from within “Fortnite” itself, and another 8.4 million through YouTube and Twitch livestreams.

A flood had been anticipated since dataminers unearthed various indications that the world of “Fortnite” would soon be subject to rising sea levels, with water resistance impacting movement.

Instead of escaping an otherworldly storm, fleeing toward the “Fortnite” map’s epicenter and into inevitable conflict with other players, “Fortnite” fans now find that the wall of water transfers its own momentum onto avatars, propelling players back out into the open, and quite possibly, to their doom, should they be pushed from a great height.

The Device event also sets up a new strand of emerging backstory, as blond-haired Jonesy, the presumptive Fortnite mascot, has something to do with a group or organization that exercises full or partial control over The Island.

“Fortnite” chapter 2 season 3 was initially expected in December 2019, but numerous delays and extensions to season 2 have meant that this latest update of the popular multiplayer game now arrives on June 17.

The desire to master a new set of underwater movement mechanics is thought to have been behind some of the initial delays, while response to the COVID-19 pandemic may have impacted development work.

An international protest movement surrounding “ongoing injustices in society, from the denial of basic human rights to the impact of racism both overt and subtle against people of color” that followed the death of George Floyd was directly cited as the reason for moving season 3 from June 11 to June 17.

A new season brings with it a new seasonal Battle Pass and refreshed “Fortnite” store content, providing revenue for the free-to-play game across PlayStation 4, Xbox One, Nintendo Switch, iOS and Android. JB