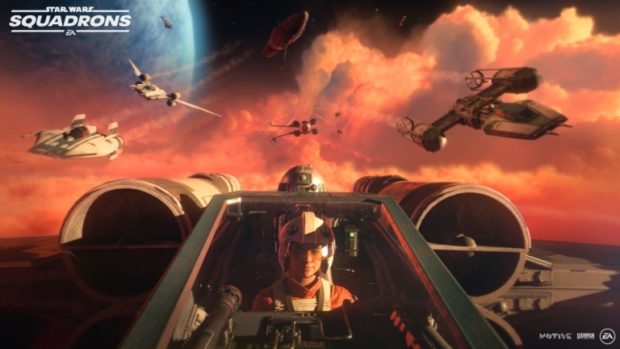 Forget what you thought you knew about there being no fire in space. This is “Star Wars”. Announced for Oct. 2, 2020 on PlayStation 4, Xbox One,and PC, “Star Wars: Squadrons”, the latest franchise tie-in from Disney’s video game partner Electronic Arts, got a reveal this week with a new trailer.

The new game is set in the aftermath of 1983’s “Star Wars: Episode VI – Return of the Jedi” and the destruction of the second Death Star.

Players will be able to fly as pilots for the New Republic or the Empire; five pilots together make up a squadron.

EA is also looking to support VR headsets on PlayStation 4 and PC, while the PC gaming community can expect to find “Star Wars: Squadrons” across Steam, the Epic Games Store and EA’s own Origin store.

A release date of Oct. 2 falls close to the launch of new consoles from Sony and Microsoft, the PlayStation 5 and Xbox Series X lines. Both manufacturers have, to one degree or another, stressed compatibility between their new machines and games made for the preceding generation of consoles.

The debut of “Star Wars: Squadrons” acts as a taster for an EA Play 2020 showcase event, set for Thursday, June 18.

The online showcase replaces EA’s planned activities for the Electronic Entertainment Expo, which was canceled in response to the COVID-19 pandemic.

It had been moved back by a week in acknowledgment of the international civil rights protests that followed the May 25 death of George Floyd in Minneapolis, United States. JB