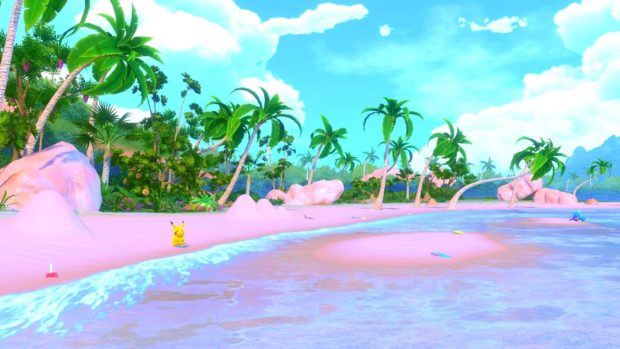 A wild Pikachu appears on a tranquil beach in “New Pokémon Snap”. Image: courtesy of Nintendo U.K. via AFP Relaxnews

There might not be a release date just yet, but “New Pokémon Snap” is already cued up as an idyllic successor to the adventure of “Pokémon Sword & Shield” and the calming routine of “Animal Crossing: New Horizons”.

These Pokémon may already be well known to fans of the franchise: for them “New Pokémon Snap” offers not only the chance to find them in relatively undisturbed natural habitats, but the opportunity to discover never-before-seen expressions and behaviors, Nintendo says.

Pokémon aside, the basic gameplay loop of “New Pokémon Snap” doesn’t appear too far removed from the marine exploration of “Endless Ocean” (Nintendo Wii) or “Beyond Blue” (iOS, PS4, XBO, PC), the above-ground “Afrika” (PlayStation 3), or even the urban shutterbugging of recent and unusual dystopian assignment “Umurangi Generation” (PC).

When will “New Pokémon Snap” release for the Nintendo Switch? Nintendo is keeping that secret for the time being, content to reveal the game’s title, broad concept activities and a debut trailer.

However, the company’s late 2020 release calendar has been looking suspiciously devoid of big-ticket items for a while, especially given that Microsoft and Sony will be launching new Xbox Series X and PlayStation 5 consoles at the time.

A sequel to “The Legend of Zelda: Breath of the Wild” was announced in June 2019 but, like “New Pokémon Snap”, is currently awaiting a release date; “Pokémon Sword and Shield”, “Ring Fit Adventure” and “Luigi’s Mansion 3” were among Nintendo’s contributions to video game spending in late 2019.