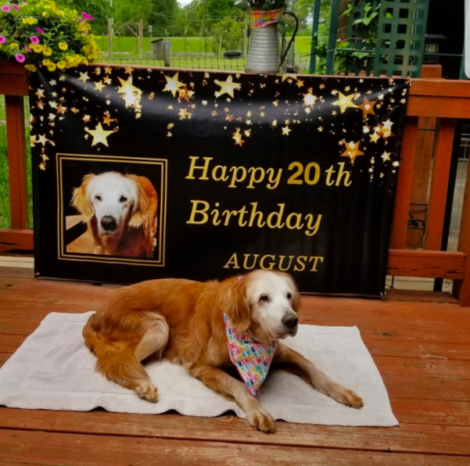 A 20-year-old dog from the United States was declared the “oldest known” and “oldest living” Golden Retriever in history.

Augie was apparently rehomed twice before Jennifer and Steve adopted the dog when it was 14 year old.

The dog got a dog-friendly carrot cake for its 20th birthday. Augie also bonded with her Golden Retriever siblings Sherman, Belle and Bruce, according to the website. The GoldenHeart Golden Retrievers Rescue organization showed the dog’s celebration via Facebook last Saturday, June 20.

Most golden retrievers live for about 10 to 12 years, according to Golden Hearts. Some reach up to 13, 14 or 15 years, but many of them live shorter than their average life span.

Augie’s owner, Jennifer, said the dog is “surprisingly healthy” for its age. The dog could still move around well, although it struggles to stand up at times. Augie enjoys daily walks around the yard, the report cited.

The dog had kidney issues when it was 14 years old. To keep the dog healthy, it now eats a mix of dry and wet dog food, and takes supplements for its joints and kidneys.

Golden Hearts credits Augie’s long life to “great genetics” and its owners, who have done a great job of taking care of the dog. The group also gave some tips to other pet owners on how their Golden Retrievers could live a longer life.

These tips include listening to the veterinarian’s advice on what is best for the dog’s health and paying attention to the dog’s needs. The dogs must also be fed with quality dog food, groomed regularly and have regular exercise. Cha Lino/JB