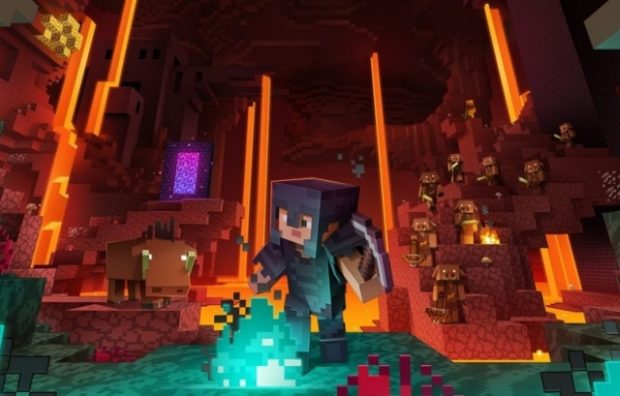 The fiery depths and their peculiar inhabitants await in the “Minecraft” Nether update. Image: Courtesy of Mojang Studios/Xbox Game Studios via AFP Relaxnews

In version 1.16, players can expect to craft new types of environment, encounter new creatures and mine new kinds of blocks to make use of when they explore the traditionally inhospitable region.

Skilled exploration is rewarded through the retrieval of lava-proof Netherite, which can be used to further upgrade Diamond-grade tools, armor and clothing.

Porcine humanoids called Piglins have at last been added after 10 years of anticipation — the snouted beings are adept at both bartering and battering.

New biomes include the rocky Basalt Deltas, the cavernous Soulsand Valley, the Crimson Forest and its rare and relatively peaceful Warped equivalent.

Introducing players to this brave, newly overhauled world is the Bedrock Edition’s free Way of the Nether adventure map — a scenario that, by necessity, exposes them to the Minecraft Marketplace in order to download it.

The Nether Update also helps bring the Bedrock Edition of “Minecraft” up to speed with several minor features previously confined to the original, legacy Java Edition for PC, Mac and Linux.

The Bedrock Edition, Microsoft’s preferred version of “Minecraft”, allows for crossplay between players on Android, iOS, Nintendo Switch, PlayStation 4, Xbox One and Windows 10.

Released in 2009 and becoming a word-of-mouth sensation before its official 2011 launch, “Minecraft” had accrued 200 million sales by May 2020, by which point it also boasted 126 million monthly active players.

Microsoft bought out its development studio in 2014 for the sum of $2.5 billion and, this year, has been using it to showcase the sort of raytracing technology that’s to drive the next generation of technology, including those in the Xbox Series X line.

The franchise’s latest expansion launched in May through “Minecraft Dungeons”, a recognizably blocky spin on the combat role-playing game genre inhabited by “Path of Exile”, “Diablo” and “Torchlight”.

The “Minecraft” empire has also found a second way to occupy mobile device screen time through “Minecraft Earth”, a franchise-loyal iteration on some of the ideas behind augmented reality game “Pokémon Go”. RGA