Round cat nearly put down for spine condition, rescued by vet 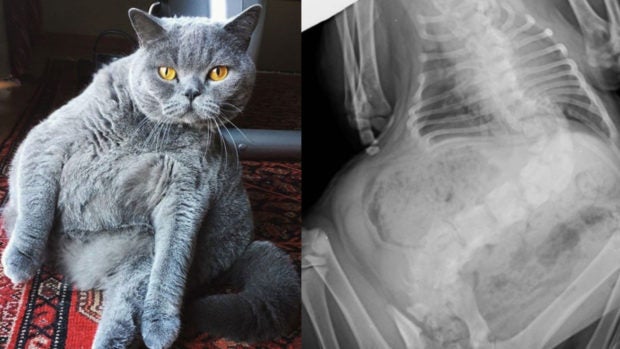 Before a cat with severe scoliosis found a loving home, she was almost placed under mercy killing by her former owner.

Now the 4-year-old cat named Pitoe is not only loved by her owners, but also by her fans online. The granddaughter of the cat’s owners, Mira, first posted about Pitoe’s condition via Reddit (MarieGotLost), where she gathered attention due to her cuteness and round built.

According to Mira, despite her “beachball” size, the cat was not overweight. The curvature in the spine brought about by scoliosis makes Pitoe short and round.

Pitoe’s former owner was a cat seller who intended to euthanize the cat due to her scoliosis. Mira’s parents, who were the veterinarians assisting Pitoe’s former owner, decided to adopt the cat for Mira’s grandparents. She recounted Pitoe’s journey via Bored Panda yesterday, June 24.

The cat and Mira’s grandparents were “a match made in heaven” since the elderly couple initially feared to get a cat because it might jump over the balcony of their apartment.

Mira’s veterinarian mother figured that the cat would be a calm pet due to her scoliosis. According to Mira, Pitoe is “not as mobile as other cats” since she is unable to jump. However, she “can waddle, run, play, and climb like a pro.”

One of her hind legs is not as functional, but the cat is under no pain. Pitoe is also doing “amazingly well” with Mira’s grandparents and is “spoiled rotten” by them.

“To be honest, she surprised all of us with how playful and active she can be,” Mira was quoted as saying. “[But] around my grandparents, she’s pretty calm, as if she knows she needs to take it easy with them.”

The cat gets a lot of check-ups from “all the veterinarians” in Mira’s family to ensure that she is healthy. She is also placed on a diet to prevent her from being overweight.

Vertebral malformations such as scoliosis are most often genetically inherited by cats, according to PetMD‘s report on Jan. 25, 2010. Severe cases of scoliosis may cause the cat to display ataxia (a condition where an animal is unable to control the movements of its muscles) and paresis, which is a type of paralysis. Cha Lino/NVG